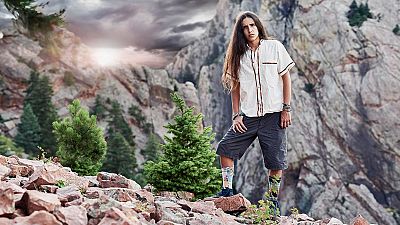 Despite only making up 5 per cent of the world’s population, Indigenous communities are disproportionately affected by the climate crisis. From land loss to exploitation to physical violence, Indigenous peoples are increasingly frontline victims of the damage being inflicted on the planet globally.

Xiuhtezcatl Roske-Martinez is a 20-year-old organiser, hip-hop artist and activist, living in Colorado, USA. His father is Mexica - the Indigenous population of central Mexico - and Xiuhtezcatl and his siblings were raised in line with traditional Mexica culture, something which shaped his understanding of environmental issues.

“That connection [with the environment] grounded me in a very human way,” Xiuhtezcatl explains, “my understanding of climate issues isn’t solely this idea of ice caps melting and polar bears, or the stereotypical imagery of sea levels.

“For me, as I’ve continued to refine my understanding of the climate crisis, it’s like this is a struggle of cultural survival for my people, for Indigenous folks specifically, who are on the frontlines everywhere, at every point of the crisis.”

For Xiuhtezcatl, environmentalism is inexorably linked with other forms of social activism; he believes the climate crisis should never be treated in isolation. Instead he argues we must see it as part of a wider pattern of systemic oppression and inequality.

“Indigenous peoples resisting colonial power has been a fight that is deeply ingrained in our communities. If you think about what the climate crisis is: the exploitation of communities for resources, whether that be fossil fuels of precious minerals that are fuelling an economy, they are built off the backs of oppressed communities.

“The climate crisis is a matter of cultural survival for us,” he adds.

Solidarity can stretch across borders

Although there are over 475 million Indigenous people in the world, only 0.1 per cent of this population live in Europe and Central Asia, which means that Indigenous communities and the hardships they face can feel particularly distant to some Europeans. But Xiuhtezcatl feels that support and understanding can still be achieved without needing to be physically close to those on the frontlines of climate change.

“There’s a lot of resources and a lot of ways in which allies should connect, and it’s possible for people internationally to support and centre Indigenous voices,” he says, pointing to Standing Rock as an example of global focus on a very specific moment.

Although Indigenous struggles can feel far away at times, Xiuhtezcatl highlights the responsibility Europe has for the ongoing exploitation these people are subjected to.

“There’s so many European mining companies that are out in the Amazon, exploiting Indigenous folks on the frontline there. There’s a very complex web of interaction between many nations with the extractive industries, which a lot of Indigenous communities are resisting,” he explains.

“Maybe in Europe there’s not fights over pipelines, but the connection between these extractive empires are connected - and I would encourage you all to inform yourselves around that. Because every level of extraction and exploitation lands on the backs of frontline communities, predominantly Indigenous, Black and Brown communities.”

There’s so many European mining companies that are out in the Amazon, exploiting Indigenous folks on the frontline there.

Seeing our collective, global problems as interlinked is also at the heart of international solidarity for Xiuhtezcatl.

“For those across the pond, our troubles are very connected in a lot of ways, and I think we can frame the ways in which we move and organise and build power as a generation, through understanding that these issues that we're experiencing, whether it's the climate crisis, or racial injustice, or police violence, or family separation, are connected.”

At the age of 20, Xiuhtezcatl has already achieved an extraordinary amount. From TED Talks, to filing lawsuits against the US government over climate inaction - he’s been at the forefront of environmental activism for many years. When he was 15, he delivered his first address to the UN in English, Spanish and Nahuatl.

“I think as youth we are uniquely positioned to not only imagine a different world, but to also challenge the existing power structures that have inhibited us from reaching that,” says Xiuhtezcatl.

“The mainstream environmental narrative for a very long time wasn't grounded in ideas of transformative change, or a broader understanding of what actually defending our natural resources, clean water, our land, our air, our species actually looks like.”

As a hip-hop artist, Xiuhtezcatl is also well aware of how art can be used, by young people especially, to shape activism.

“I think our generation is incredibly diverse and innovative, and our approaches to creating change are brilliant and are multifaceted and are complex,” he explains. "In my own pursuit of my art, my music, I've witnessed how to be such a powerful tool to help open up people's hearts and have conversations in a very different way.”

Despite being so young, Xiuhtezcatl feels inspired and energised by teen activists even younger than himself coming through the ranks.

“I see 15,16,17-year-olds and they’re way, way ahead of where I was when I was that age. These young kids coming up now are on a whole other level - and I’m inspired by that, inspired by their creativity.

“Time is running out every single day, and there’s a lot ahead of us - a lot of work to be done.”