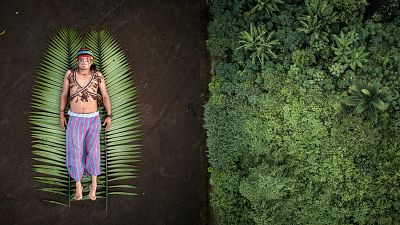 José is one of the leaders of the Achuar indigenous people in the Sharamentsa community. He defends his rainforest by generating collaborative projects.   -   Copyright  Pablo Albarenga
By Rosie Frost  •  Updated: 11/06/2020

The winners of this year’s Sony World Photography Awards have been announced and they paint a picture of a world facing incredible amounts of uncertainty.

The top prize of $25,000 (€21,964) was awarded to a powerful series of photographs exploring the relationship between Indigenous activists and the landscapes they seek to protect.

Alongside ten other categories, this year the Sony World Photography Award has also introduced a whole section dedicated to those photos that tell stories of global environmental challenges. It recognises artists addressing human impact on the planet and the often devastating effects of those actions. The competition says it hopes that this new category will bring attention to the need for us to reconsider our relationship with the natural world.

Take a look at the extraordinary winners.

The overall title of Photographer of the Year was awarded to Pablo Albarenga for his series Seeds of Resistance. Each image pairs portraits of activists with the landscapes and territories they are fighting to protect.

These environmentalists face threats from mining and agriculture with at least 207 people killed while protecting their communities in 2017. According to a report by Global Witness in 2018, a majority of these killings occurred in Brazil where 57 assassinations of leaders and activists were recorded.

Albarenga uses the series to explore the relationship between these community protectors and the lands they strive to preserve, by shooting the images from a bird's-eye perspective as though they are laying down their lives for the cause. These are sacred areas where hundreds of generations of these protector’s ancestors have been laid to rest.

“With this win I see two victories,” Albarenga says. “ First, the opportunity to tell the stories of the traditional communities of the Amazon by highlighting the people who are still fighting not only for their future, but for everyone’s.”

Secondly, he says, it is a win that the photographer of the year is one from Latin America, a continent whose story is “historically told through the eyes of foreigners”. The project is deeply personal to Albarenga.

“This year’s winner comes from the Creative category and is a brilliant set of images which offers a powerful visual record of how deforestation goes hand in hand with the destruction of communities and peoples,” Mike Trow, Chair of the 2020 Professional photography competition said.

The first place winner for the Environmental category, Robin Hinsch, shot his series Walahala in Nigeria in 2019, to draw attention to the ecological damage being done by the oil industry in the country.

The Niger Delta is a wetland that covers 70,000 square kilometres across nine states in Southern Nigeria. It is home to over 30 million people from 40 different ethnic groups and, in the past, the region had an incredibly rich ecosystem with one of the highest concentrations of biodiversity on the planet.

But this was before the oil industry moved in to take advantage of the extensive petroleum resources present in the area. The United Nations estimates that three million barrels of oil were spilled into the Delta between 1976 and 2001.

Spills have remained common and little has been done by authorities or oil companies to clean up and neutralise the effects of these environmentally disastrous events.

The focus of Álvaro Laiz’s second place winning series, Atlas from the Edge, is the Chukchi people. This Indigenous group has lived along the coast of the Bering Sea in Russia for thousands of years and their traditional lifestyle reflects their close relationship with the environment.

Laiz’s series of photos explores the concept of natural symmetry reflecting on how humans mythologise the world around them. In his description of Atlas from the Edge, he says that the series raises questions about the Anthropocene era by exploring the way in which humans relate themselves to the environment and other species.

In this series of images, Luca Locatelli takes a look at what could be the future of farming. In his description of the third place winning photos, Locatelli references population growth and potential food shortages as a looming future crisis. The Future of Farming provides a “dystopic view” of the technological advances that could herald a revolution in the way we produce food.

Siberia B.V. in Maasbree, Netherlands, grows lettuce in its hypermodern greenhouses. The same amount of fresh leafy veg can be grown on one tenth of the land that is usually required by planting them in this carefully controlled environment. The company says that it makes Dutch-grown vegetables available sustainably all year round.

Also featured in the photos is company Aerofarms in Newark, US. This is a vertical farming company housed in a repurposed steel mill aiming to grow fresh produce in the heart of one of the region’s busiest industrial neighbourhoods.

Plants are grown on a reusable material made from recycled plastic bottles and are watered using a system that uses 95 per cent less water than farming in fields. They don’t use any pesticides and lighting is designed to provide only what is needed to help the plants grow.