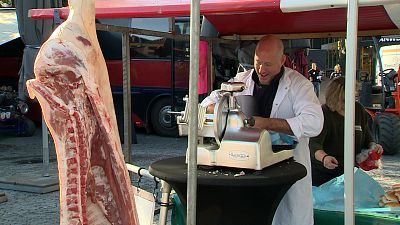 Addressing climate change is a major priority in the Netherlands.

With agriculture to blame for 40% of nitrogen emissions, billions could be spent on reducing livestock to lower ammonia pollution.

Feeling in the firing line the agri-food sector is doing everything it can - from free burgers to kids’ entertainment - to get its voice heard, especially in urban hubs like Utrecht.

Feeling in the firing line – from free burgers to kids’ entertainment, the agri-food sector is doing everything it can do have its voices heard - especially in urban hubs like Utrecht.

Farmers gathered there from all over the country, not just offer locals a free lunch, but to flag their issues with the Dutch government.

If I look at it from a personal point of view, it means my future is annihilated.

“People are worried because the government wants to take away our licences and they want to take away the land from the farmers,” says Bart Kemp from Agractie Nederland.

“If I look at it from a personal point of view, it means my future is annihilated,” says dairy farmer Max.

“I am very much worried about climate change,” adds Hilda, who’s also a farmer. “But it is a worldwide problem, but in this little country, we cannot solve all the problems worldwide.

But with 100 million cows, chickens and pigs, this ‘little country’ of 17 million has one of Europe’s largest livestock industries. It is the EU’s biggest exporter of meat.

Climate activists empathize with farmers but say the country must eat less and export less.

Hanneke’s colleagues are currently on route to COP26 by foot. From Groningen to Glasgow, their message is clear - slow down climate change and speed up the energy transition.

“We need to stay under the 1,5 degrees. It seems such a little bit, 1,5 or 2, but the difference is immense on what kind of world we will be living in,” she says. “we need to look at how we are flying, shipping, industry, we need a better deal.”

All are eyes now on COP26 where the stakes could not be higher.