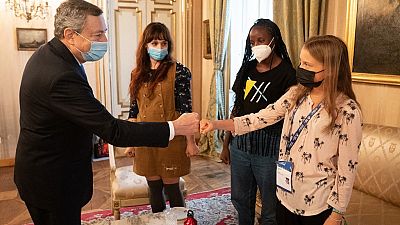 On the opening day of the summit, Thunberg chastised political leaders for what she called their "blah blah blah" promises on climate change, warning them that time is running out to tackle the crisis.

Draghi attempted to address the criticism in his speech to the young activists but was clearly struggling to convince them.

"Your pressure, frankly, is very welcome. We need to be whipped into action. Your mobilisation has been powerful, and rest assured, we are listening," Draghi said, just before his discourse was interrupted by a handful of protesters who were quickly escorted out of the room.

But activists away from the conference were clearly not convinced either.

Half a dozen young activists demonstrated their disillusionment with world leaders' response to global warming by flashing a cardboard sign reading "The Emperor Has No Clothes" ahead of Draghi's arrival on Thursday morning, and walked out before he addressed the group.

The delegates said police then forcibly detained them, asked to see their passports and photographed their conference badges.

Italy's environmental transition minister Roberto Cingolani, who is hosting the event, said he did not have details of the police action but that "there was no violence whatsoever. At the end of the day, it was peacefully fixed".

The events unfolded four weeks before the UN COP-26 climate summit in Glasgow.

Thunberg will lead what is expected to be Milan's largest climate demonstration on Friday.