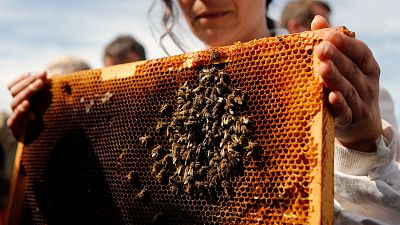 French beekeepers have warned that honey production is at historically low levels this year.

Just between seven to eight tonnes of honey have been produced - just half of last year's production, the National Union of French Beekeeping, Unaf, said.

They blame the poor honey harvest on cold, wet and windy conditions with many French regions having suffered from frost.

While 2020 and 2014 were good years for honey production, it has been in constant decline for years.

Bee colonies are heavily impacted by climate change, by the arrival of predatory species such as Asian hornets, and by the massive use of pesticides.

Pesticides were supposed to be banned permanently in France last year but the government has authorised their use to help farmers with the cultivation of sugar beets.

Many European countries have experienced significant production decreases as well as in Turkey and in the United States.

"There will be less French honey in stores but a lot of foreign honey," said Christian Pons, president of Unaf.