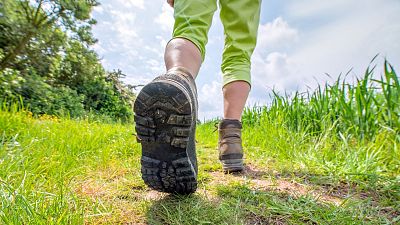 Something as simple as walking more could alleviate pressure on the UK's National Health Service (NHS).   -   Copyright  Canva
By Lottie Limb  •  Updated: 14/10/2021

Tackling climate change will not only avert disaster but lead to healthier lifestyles in the short term, saving European health services vast sums of money in the process.

By introducing greener policies like cutting down on meat, insulating homes and promoting walking, the UK government can save the NHS, its prized national health service, £17 billion (€20bn) over the next twenty years, according to an eye-opening new report.

Researchers at the Academy of Medical Sciences and the Royal Society hope their findings will spur leaders on to “bring health to the forefront of the climate narrative” at COP26 next month.

“Climate change poses a catastrophic threat to humanity and the natural systems that underpin our lives,” says report co-chair Professor Joanna Haigh, from the Grantham Institute – Climate Change and the Environment at Imperial College London.

“It is obvious that tackling climate change will have a positive impact on human health in the long term, however our report provides evidence that many of the actions needed for the UK to meet the target of net-zero greenhouse gas emissions by 2050 will also benefit our health in the near-term.”

The inter-connected and far-reaching consequences of climate change can be tricky to quantify, but the report’s modelling provides a clear manifesto for greener measures.

Swapping half of UK meat and dairy food consumption for fruit, vegetables and cereals would prevent 37,000 deaths a year from heart disease, stroke and diet-related cancers, the authors say.

While encouraging city dwellers in England and Wales to walk around 1km more and cycle 3km further each day could dramatically reduce pressure on the NHS, to the sum of £17 billion.

Of course, less cars on the road would also lower air pollution, which currently causes up to 36,000 premature deaths a year in the UK.

Buildings are another area where policymakers can improve the health of people and the planet. In Britain, up to 50,000 deaths a year are linked to low temperatures, so better insulated homes would save lives as well as cutting down on indoor fuel bills - which were responsible for 17 per cent of the country’s fuel bills in 2019.

The changing climate picture varies across Europe. Elsewhere on the continent, heat waves are a rising cause of illness and death, with Belgium’s National Climate Commission identifying this as a key impact for the country’s population and public healthcare.

The Centre for Climate Adaptation spells out the vulnerabilities for different European countries, and opportunities for adaptation that will enable people to live longer, healthier lives.

Co-chair of the new report Professor Sir Andy Haines adds that it gives many ‘win-win’ examples of actions that would have a positive impact on health and the climate.

“Sectors including transport, food, building and energy should take health into account when implementing climate actions to capitalise on these double benefits. Many of the measures, such as improved public transport access and energy-efficient housing, could also help decrease health inequalities.”