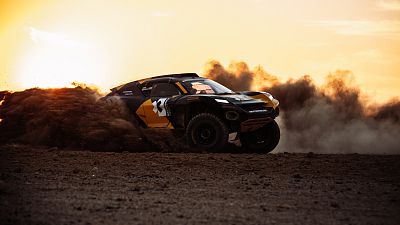 When you think about projects combatting the climate crisis, extreme off-road motor racing isn’t exactly the first idea which springs to mind. But Extreme E is looking to change all that.

Extreme E is an off-road racing series created by the founder of Formula One’s electric counterpart, Formula E, with official sanctioning from the FIA. There are five rounds of the all-electric competition, each with semi-finals and finals falling over different weekends in 2021.

Huge names from the world of motorsport have already jumped on board, with Formula One legends like Lewis Hamilton and Nico Rosberg both announcing their own Extreme E teams.

Still confused as to what this has to do with the environment? Here’s where it gets interesting.

The five rounds take place in locations on the frontline of the climate crisis. Each race has a different focus:

The organisers have consulted with ecologists and climate experts to ensure the events don’t negatively impact the locations, and the cars are all powered through hydrogen fuel cell technology.

In each location Extreme E plans to both raise awareness around the problems local communities are facing, while also launching a ‘Legacy Programme’ to leave behind ongoing social and environmental support.

We took a closer look at what that legacy is going to look like in Senegal, where next year’s event will take place in Lac Rose, in May.

How is Senegal impacted by the climate crisis?

Situated on Africa’s west coast, Senegal sits within the Sahel - a large region across the entirety of the continent, which is locked in a battle against desertification. The Sahel is home to some of the poorest communities in the world, who face rapidly depleting natural resources, persistent droughts, and famines as a result of the climate crisis.

Despite not being a major emitter of greenhouse gases, coming in at 150th globally for emissions, Senegal is disproportionately affected by climate change. Extreme droughts mean food insecurity is a growing concern in the country.

Because of its coastline, Senegal is rich in biodiversity, home to thousands of plant and animal species. But deforestation and diminishing wildlife populations are other major environmental issues for the population - especially as 70 per cent of people in Senegal are involved in agriculture.

Fishing is also a huge part of Senegal’s economy, and climate change is threatening marine ecosystems. From coastal erosion to rising sea levels, communities who rely on the ocean for income and their livelihoods are increasingly in jeopardy.

“I’m thrilled to confirm Senegal as our Ocean race location,” says Alejandro Agag, Founder and CEO of Extreme E. “This is an area of outstanding natural beauty but sadly, like many of the world’s coastal areas, it is under severe threat from a variety of climate issues.

“This coastline is currently losing three to four meters each year, with a key contributor to this being Greenland’s melting ice cap, even though it is over 6,500km away in the Arctic Circle.”

The Senegal event will take place at Lac Rose, just 30km away from the country’s capital city, Dakar. Extreme E hopes to bring major stakeholders together to address the region’s critical needs, including rising sea-levels, marine ecosystem degradation, and desertification.

In order to leave a legacy behind for the region, Extreme E is also working in partnership with a local NGO, Oceanium, to plant a million mangrove trees in Senegal. Mangroves are a really important plant, as they help create an incredibly rich ecosystem which can reduce flooding risks, storm erosion and act as a carbon store too. The trees are also able to serve as nurseries for fish, while filtering pollutants from water.

Mangroves are an essential part of our eco-system, helping promote biodiversity and protecting areas from tropical storms and flooding. But through oil spills and deforestation we have destroyed around half the planet's mangrove forests, which is safeguarding the areas we have left is vital for the planet's future. #mangroves #mangroveforest #deforestación #deforestation #mangrovesarelife

The mangroves will be planted across five areas, covering 60 hectares - over 110 football pitches - to help reforest the area.

“Senegal has around 185,000 hectares of mangrove estuaries in the region,” says Angèle Lecomte, Executive Director of Oceanium, “but unfortunately these are disappearing very quickly.”

Over a quarter of Senegal’s mangroves were lost through droughts and deforestation between 1980 and 2000.

“The loss of mangroves is having a negative impact not only on the environment, but also for local communities that depend on them for their livelihood, making it so important to restore these degraded areas,” adds Lecomte.

“One hectare of mangroves can capture five carbon tonnes of CO2 per year, meaning 60 hectares over even just five years could capture approximately 1,500 carbon tonnes, as well as providing many socio-economic benefits to the local economy which will ensure a positive impact for years to come.”

“This project isn’t just about planting mangroves,” she says, “we aim to leave a real legacy and support Oceanium and the communities it works with long term.”

At the start of this month Extreme E also announced a second legacy programme for Senegal, focused on creating opportunities for circular economies and regenerative agriculture in the Lac Rose region. The organisers hope this holistic approach, establishing multiple projects covering different issues, will help leave a more meaningful impact behind.