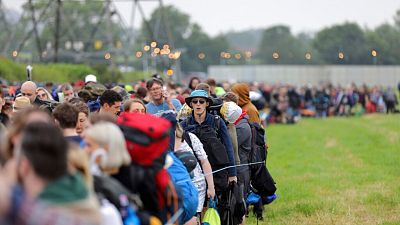 Scientists have discovered “environmentally damaging” levels of illicit drugs in a river running through the Glastonbury Festival site.

They are now worried that this could be harming wildlife downstream - including a population of rare eels.

The study discovered concentrations of MDMA, a type of the class A drug ecstasy, had quadrupled in the week after the festival in 2019. Cocaine in the water rose to levels that are known to harm the lifecycle of the European Eel.

Even tiny amounts of this drug can cause hyperactivity and muscle wastage in river eels, according to previous research.

Ingesting these chemicals could hinder river eels’ annual migration through the oceans.

How did the drugs get into the water?

The team at the University of Bangor suspect that public urination is behind the contamination of Whitelake River in Somerset, UK.

“Unfortunately, Glastonbury Festival’s close proximity to a river results in any drugs released by festival attendees having little time to degrade in the soil before entering the fragile freshwater ecosystem,” says Dan Arberg from the University of Bangor’s School of Natural Scientists.

Now they are urging people attending festivals on greenfield sites like Glastonbury to think twice before urinating in public. Using the toilets provided could stop substances such as cocaine and MDMA from entering the waterways.

“The level of release is unknown, but festivals undoubtedly are an annual source of illicit drug release.”

A spokesperson for Glastonbury Festival told Euronews Green that peeing on the land is something that they will “continue to strongly discourage at future Festivals”.

“We also do not condone the use of illegal drugs at Glastonbury,” they say.

Protecting local streams and wildlife is of “paramount importance” to the festival’s organisers and they say that they have a thorough and successful regime in place to take samples from the waterway during each event.

“There were no concerns raised by the Environment Agency following Glastonbury 2019.”

Don’t Pee On The Land

In previous years, the festival ran a campaign called Don’t Pee On The Land which asked festival-goers to stop public urination, encouraging them to think about the environmental damage it could cause to Worthy Farm, where Glastonbury is held every year.

Organisers have made attendees aware in the past that the UK Environment Agency has the power to close the festival site if there is too much pollution.

“We are aware that the biggest threat to our waterways - and the wildlife for which they provide a habitat - comes from festival-goers urinating on the land,” says the festival.

“This is something we have worked hard to reduce in recent years through a number of campaigns, with measurable success.”

They added that they would be keen to see the full details of this new research and work with the University of Bangor to understand the results and recommendations.