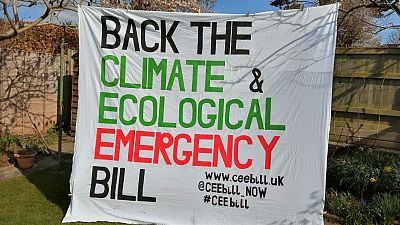 Campaigners are hoping the CEE Bill is the impetus the UK needs to adequately address the climate crisis.   -   Copyright  Zero Hour
By Charlie Jaay  •  Updated: 08/09/2021

The Climate and Ecological Emergency (CEE) Bill is scheduled for its second reading in the House of Commons this Friday.

It calls for an emergency strategy for the UK to actively conserve and restore nature, and ensure annual legally binding targets, whilst making a legal commitment to ensuring warming is limited to 1.5C.

The head of the UN’s Environment Programme, Inger Andersen, recently criticised global leaders for "not acting strongly enough", and Labour leader Keir Starmer accused Boris Johnson of being "missing in action" when it comes to tackling the climate emergency.

There is a growing sentiment that current UK legislation and policy just doesn't have the necessary urgency to tackle the climate and nature crises and that more needs to be done.

Tabled as the Climate and Ecology Bill, this Private Member’s Bill was introduced to Parliament by former Green Party Leader, Caroline Lucas MP.

“We are dangerously close to the 1.5 C temperature limit that the world signed up to in the Paris Agreement”, she said.

“As COP26 approaches the UK, as host, has to lead the way in halting global temperature rise and do much more to actively restore our natural world.

“The new IPCC report is clear that whilst it is still possible to limit global heating to 1.5 degrees, rapid emissions cuts are needed to ensure this lifeline remains within reach.

“The Climate and Ecological Emergency Bill is the legislation which we desperately need to avert climate catastrophe, restore nature, and give citizens a real say in how we deliver on these goals. Further delay is not an option - we need bold legislation to match the urgency of the times.”

Currently, the CEE Bill has cross-party backing from 115 MPs, nearly 30 Peers, over 100 councils and 200 organisations, although the Green Party, Liberal Democrats and Plaid Cymru are the only official backers.

“We hope that the Tories back this bill, and use it to show the world we are acting to cut emissions and stop the climate emergency," says Ed Davey MP, Leader of the Liberal Democrats.

Barry Gardiner, Labour MP and one of the Bill’s co-sponsors says, "Recent action from this government has not been swift or bold enough- It is pursuing a path to climate disaster.”

Even the government’s chief climate advisory body known as the Committee on Climate Change (CCC), has warned only a fifth of the emission cuts needed, are being addressed by effective government policies, whilst we risk missing our carbon budget target by a huge margin for the period 2023-2037.

“The UK's credibility, as host of COP26, depends on the action it takes now," argues Chris Stark, Chief Executive at the Climate Change Committee.

“A comprehensive plan is the best possible demonstration of UK climate leadership – at home and abroad, but so far, ministers have been far too hesitant to commit to ambitious policies to match their ambitious targets. This time period, prior to COP26, is the opportunity to put that right.”

However, the government is still funding fossil fuel projects, the Cambo oilfield has been given the go-ahead, widespread airport expansion is planned, and construction of HS2 continues.

Although biodiversity loss is often considered less of a threat to human wellbeing than climate change, according to a recent report both are of equal importance. The UK is one of the most nature-depleted countries in the world, in the bottom three for Europe, and bottom of the G7 countries, but the CEE Bill would change this.

“What we really need is to think about things in the round," explains Dr Amy McDonnell, Campaign Co-ordinator for Zero Hour, the grassroots campaign dedicated to getting the CEE Bill passed into law.

"The planet is sustained and regulated by interconnected systems - if we deal with climate change but we don't get to grips with the causes of nature's destruction, then this will not save us alone. We don't have time to tinker around at the edges or to take one issue and then think about the next.

“This is where the Climate and Ecological Bill comes in as a new proposed law to help the UK do all that we can to get to grips with the threat we face.”

The Bill also aims to ensure the UK’s ecosystems are protected and restored, by 2030, by enshrining the Leaders Pledge for Nature into law, which focuses on biodiversity, soils and natural carbon sinks.

It would also see the UK take full responsibility for its global impact, taking into account our entire carbon footprint, both at home and abroad, whilst halting and reversing nature loss.

This impact is much greater than the government claims, as Murray Worthy, Oil, Gas & Mining Campaign Leader at Global Witness, one of the most recent organisations to pledge support for the Bill, explains.

“The UK’s impact on the climate crisis goes far beyond just what we produce in the UK. Demand from British consumers, for the goods we buy, drives manufacturing and production in other countries – accounting for more than 40% of the total UK emissions”, said Worthy.

“Beyond this, as a global financial centre the City of London plays an enormous role in financing the industries driving the climate crisis – from deforestation to the fossil fuel industry.

“The Climate and Ecological Emergency Bill is essential in ensuring the UK government takes responsibility for tackling all of the UK’s impacts on the climate.”

Although not currently taken into account, demand for cheap food and goods has brought about a substantial increase in overseas production, and transportation of these products to the UK, driving the loss of tropical forests and increasing emissions in countries such as China.

If included, our emissions only fell by 19 per cent from 1990 to 2018 - less than one per cent per year - according to a leading study for the Global Carbon Project, not 46 per cent as claimed by the government.

Our planet is in crisis, and time is running out.

If passed into law, the climate and Ecological Emergency Bill would have far-reaching effects, with the promise of a deeply transformative future but, for this to happen, it needs to gain the support of a majority of MPs.

Zero Hour is calling on everyone to join the campaign, for supporters to get in touch with their local group, and for MPs to support the Bill by attending the debate on 10 September 2021 when it will be heard at Second Reading.