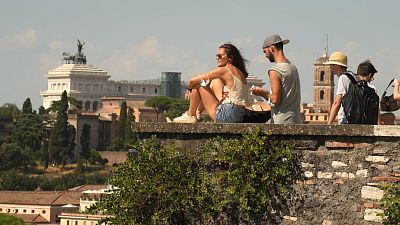 Climate change means that dangerously high temperatures now hit European cities more frequently. So, what can be done to protect the most vulnerable? In this episode of our monthly climate change series Climate Now, we head to Rome to see the latest efforts to better manage the health risks from heatwaves.

Firstly, here is the latest data from the Copernicus Climate Change Service for July 2021.

There were severe heatwaves from the Baltic to eastern Mediterranean, with temperatures reaching 42 degrees Celsius.

However, there was a contrasting picture across Europe: from Portugal to Germany, and in parts of north-western Russia it was colder than average for the month of July.

With climate change, Europe is likely to see heatwaves more frequently in the future. Copernicus has developed a tool that projects the number of heatwave days European countries will face based on a range of climate change scenarios. You can take a look and explore the heatwave projections for your part of Europe.

There was also a varied picture across the continent in July when it came to rainfall. There were devastating floods in parts of Belgium, Germany, the Netherlands, and Luxembourg.

However, eastern parts of the continent as well as Spain and Portugal experienced drier than average conditions.

The impact that extreme heat has already had on public health is significant. A recent study published in Nature shows 37% of deaths related to heat exposure around the world between 1991 and 2018 were due to global warming that humanity was responsible for. Across the 43 countries involved in the research, 9,700 deaths a year were attributed to global warming. Southern Europe was one of the worst-affected parts of the world.

In Rome, health authorities are trying to protect the most vulnerable from the heat. They have adapted a telemedicine system for COVID-19 patients, and are using it to prevent heat-related illness.

Health experts are particularly concerned for elderly people living on their own and are regularly contacting them with heatwave advice. That can range from adapting their medication to simply drinking water.

We went to meet Francesca de'Donato, an epidemiologist from the Lazio Regional Health Authority. She explained that active surveillance of vulnerable groups during heatwaves is essential.

It isn't just elderly people who are at risk during heatwaves. The problems associated with high heat put several groups at risk of heat stress, dehydration, hospitalisation, and death.

De'Donato gave some examples of who is likely to be affected by heatwaves - including those with chronic illnesses, young children, and people who work outside.

When planning a public health response to heatwaves, authorities will have to tailor their approach to their local climate, says de'Donato.

She explains that different places will deal with the heat in different ways.

"Maybe 32C for Rome is a normal temperature during the summer. For the UK or for Finland, it becomes very, very hot. So conditions need to be adapted, and warning systems need to be city-specific in order to account for this."

Densely populated urban areas will often have higher temperatures than the surrounding rural areas due to human activity.

The phenomenon is known as the "urban heat island effect" and it usually raises temperatures at night.

"On average in Rome, the urban heat island reaches an intensity of 3.4C, so that means that in the city centre, on average and at night, it's 3.4C warmer than in the countryside. But we have also observed peaks of 6.2C, so there have been very very hot nights in the city."

Local residents in Rome told euronews that the high temperatures have become unbearable. "It's no longer liveable," says Laura Grossi. " It's not like before when we could go out in the summer and have a pleasant afternoon walk, do some shopping. Now it's impossible."

For another resident, the heat doesn't die down once the day is over. "It's the night that causes the problems" says Mario Cifariello, adding, "healthwise, I have high blood pressure so I have fatigue, and I am a smoker which doesn't help"

To help manage the risks, Cecilia is working on the LifeASTI project and is developing a forecasting app for the urban heat island effect.

As part of the project, 34 weather stations around Rome, like the CREA station, are being used to monitor the climate phenomenon.