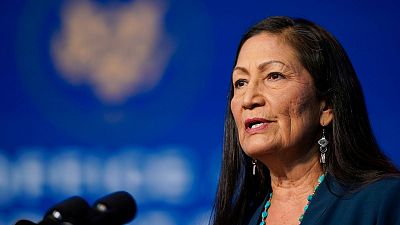 For the first time in history, a Native American woman is in charge of protecting US public land as Interior Secretary.

She was confirmed by a vote of 51-40 to the position, overseeing a massive agency responsible for roughly one-fifth of land in the United States - including its many tribal reservations.

Congresswoman Deb Haaland is a member of the Pueblo of Laguna tribe in New Mexico and is also the first-ever Native American to serve as a Cabinet Secretary, a high-ranking position within the Executive Office of the President of the United States.

Thank you to the U.S. Senate for your confirmation vote today. As Secretary of @Interior, I look forward to collaborating with all of you. I am ready to serve. #BeFierce

She proudly calls herself a 35th generation New Mexican.

Haaland was born in Winslow, Arizona, where her grandfather worked on the railroad, as part of a federal government policy of "cultural assimilation" for Native Americans. She comes from a military family, her father was a decorated Marine and her mother served in the Navy. Later as an adult, Haaland struggled as a single mother, once having to apply for food stamps to put food on the table for her children.

Throughout her career, she has worked tirelessly as a community activist, long before she decided to enter politics at a national level. Even back then, when she was campaigning in front of only 30 people, her progressive agenda included investing in environmental measures like clean energy.

Haaland says it was Donald Trump's surprise win that got her interested in running for office.

Ever since, she has been known for her work addressing climate change. "I pledge to vote against all new fossil fuel infrastructure and to fight instead for 100 per cent clean energy," she states on her website.

In particular, Haaland openly opposes the construction of the Keystone XL pipeline, which passes through Native American land. Biden recently announced that he plans to cancel the project as soon as he is sworn into office.

Haaland's nomination has been supported by tribal leaders and senators alike, yet she is no stranger to criticism.

US Rep. Pete Stauber has been asking fellow lawmakers in the House of Representatives to call for the withdrawal of Haaland’s nomination, due to her opposition to drilling oil and gas on public lands. In spite of this, she even gained the support of some Republican senators eventually including Lindsey Graham, Lisa Murkowski, Dan Sullivan and Susan Collins.

But Deb Haaland hails from the Democratic Party’s progressive wing and is a known supporter of the Green New Deal. She plans to address climate change while creating new jobs in clean energy sectors.

Click on the video above to learn more about Nominee Interior Secretary Deb Haaland.