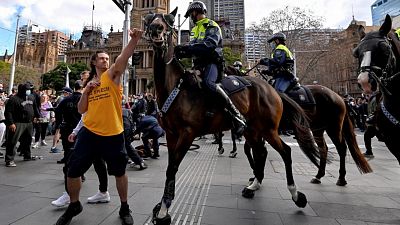 A protester tries to push away a police horse in Sydney during anti-lockdown protests, July 2021   -   Copyright  STEVEN SAPHORE/AFP
By Shannon McDonagh  •  Updated: 27/07/2021

There are rising concerns about the safety of police service animals after a horse was attacked during anti-lockdown protests in Sydney, Australia.

Two men allegedly responsible for the violence have been charged with animal cruelty.

One protester, wearing a t-shirt bearing the message “free speech - more important than your feelings”, was caught on camera during the precise moment his fist made contact with the animal.

The image quickly gained traction on social media around the world after being shared by tens of thousands of people.

Rule 1 of protest activism: don’t punch the horses. They’re not there by choice, and it’s not going to do your cause any good.

I reckon horse-punch bogan has just become the most hated man in Australia. Scott Morrison will be pleased https://t.co/6uOK4iyOaE

The horse pictured is called Tobruk, and has since received an outpouring of love and support from people across Australia who have sent him gifts and snacks.

NSW Police took to Facebook to thank people for their support and confirm that he is safe and well.

Why were people protesting?

Chaos unfolded outside Sydney’s town hall last weekend as a result of a wave of anti-lockdown protests. Australia’s COVID rate has been climbing since the beginning of the month, resulting in stricter measures across the country and Sydney has now been locked down for four weeks.

The man pictured in the viral image was one of two arrested after police tracked him down at a home in Surry Hills, New South Wales on Saturday night.

He has been charged with affray, joining or continuing in an unlawful assembly, committing an act of cruelty upon an animal and not complying with a noticed direction in relation to COVID-19. Less information is known about the other person involved.

NSW Police Minister David Elliott labelled the men, along with the thousands of others that joined them, “selfish boofheads”.

'What we saw today was 3,500 very selfish boofheads - people that thought the law didn't apply to them,' he says.

New South Wales Police says that although it recognises and supports the rights of free speech and peaceful assembly, the protest was a "breach of the current COVID-19 Public Health Orders".

Why are police horses deployed at protests so often?

Mounted units being deployed with the police is a practice that dates back to eighteenth century policing in London, UK.

"If you've got one horse, it's like having 10 coppers on the ground," Senior Sergeant Glen Potter, the head of Western Australia's Mounted Police section, told ABC Australia last year.

"I mean, there's no denying there is an intimidation factor there - if I need to break up a brawl, I can manoeuvre the horse into the brawl and separate it.”

Are they being adequately protected?

Animal rights activists argue that including horses at protests is never an ethically sound practice.

They are often deployed by the police to suppress violence at crowded events. Many forces argue that it also allows them to be more visible and approachable to those that need them.

The scenes at Sydney's protests paint a slightly different picture. They showed just how easily this can allow some animals to come into harm's way due to their innately conflict-avoidant nature.

It’s a rarity for countries to have legal protections in place for police horses and dogs - the Animal Welfare (Service Animals) Bill, first introduced in the UK two years ago, was considered to be groundbreaking for this reason.

This didn’t stop similar images unfolding during protests for the Black Lives Matter movement in the capital last year, where use of police force led to several distressed animals abandoning their officers.

A petition calling for the removal of service animals from protest events was signed by over 118,000 people and later rejected by parliament.