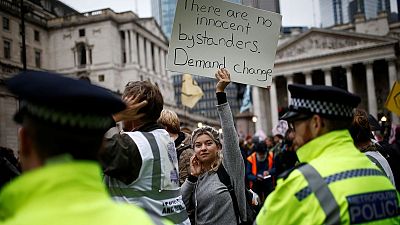 After more than a week of protests around London, the capital’s police force has rescinded its permissions for Extinction Rebellion to protest in the UK capital.

Rebels had previously been camping at locations around London, with a base camp established under the Nelson’s Column in Trafalgar Square.

Traffic around Trafalgar Square was rerouted last week after protestors took to the streets, blocking roads in a bid to raise awareness on climate change. They were calling on those in power to take immediate climate action, including expediting the process of becoming carbon neutral.

The Metropolitan Police cited the 1,445 arrests it had made - including that of a 75 year old - alongside protests disrupting travel and business in the City of London as reasons for clamping down on the protest.

“These conditions have been imposed due to the continued breaches of the section 14 condition previously implemented, and ongoing serious disruption to the community,” Deputy Assistant Commissioner Laurence Taylor said in the announcement.

“We have made significant progress in managing Extinction Rebellion’s activity at sites across central London over this past week. Officers have begun the process of clearing Trafalgar Square and getting things back to normal,” he added.

Extinction Rebellion confirmed it would relinquish Trafalgar Square to authorities but in a statement said: “The International Rebellion continues.”

“The Climate and Ecological Emergency isn’t going away and we remain resolute in facing it,” the statement continues.

“We urge the Government and the authorities to join us in doing the same. We cannot do it alone.”

However, in a Tweet, the activism group admitted it broke the law “in careful & deliberate ways, fully understanding the consequences of action being taken”.

It went on: “Today, an unprecedented, political, decision has been taken to shut down peaceful protest calling out the government for inaction in the face of crisis.”

Reactions in the Twitterverse

Many of those protesting took to social media to highlight their fury at the decision to end the protest a week early.