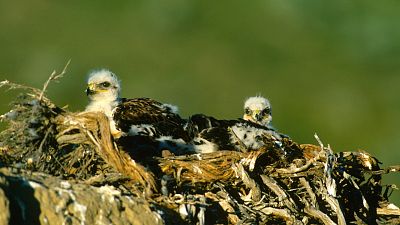 Dozens of baby hawks have been forced to flee their nests prematurely in order to escape scorching temperatures across the US Pacific coast.

America’s “hawkpocalypse” led to animal rescue organisation Blue Mountain Wildlife admitting fifteen times the amount of infants it would expect to treat in an entire year.

The rescue and rehabilitation center took in 188 hawks across its Washington and Oregon branches in response to record breaking temperatures of up 46.7 °C last month.

“It was just too hot to survive,” says Lynn Tompkins, director of Blue Mountain for over 30 years.

She told local news the baby hawks had “no choice” but to fall to their potential deaths.

Did the birds survive?

It usually takes hawks about four weeks to leave their nests, depending on their species.

These premature chicks were leaping from their treetop nests at heights of up to 60 feet with the conviction they would have a better chance of survival elsewhere.

Sadly, a fifth of the chicks brought in for treatment at Blue Mountain did not survive. The shelter is used to treating a few birds for heat related injuries in the peak summer months, but nothing close to this scale.

Staff members at the organisation’s overstretched intensive care unit eventually resorted to training members of the public to keep the hawks alive. People were advised to use sprinklers and makeshift pools of cool water to treat the less injured nestlings.

The surviving birds will stay under observation until it is possible to release them back into the wild.

“I think these events really are wake-up calls that climate change is here, that the impacts are being more and more visible,” explains Bob Sallinger, director of conservation at Portland Audubon Wildlife Care Center.

His sanctuary, also based in Oregon, admitted more than 100 Cooper’s hawks in four days.

Sadly, a fifth of the chicks brought in for treatment at Blue Mountain did not survive.

What caused the North American heatwave?

Many cities across the US and Canada’s west coast are still experiencing the fallout from being struck down by last month’s searing temperatures.

The reason for this catastrophe boils down to a mountainous “heat dome” of exceptionally high pressure across the area.

Over 900 deaths were recorded as a direct result, primarily across Vancouver, Canada, who bore the brunt of its human impact.

The consequences these temperatures have had on ecosystems stretch far beyond the birds of the North Pacific.

Echoes of the crisis were felt in Europe this week when thousands of flamingos perished as a result of Turkey’s Lake Tuz drying up in a heat-induced drought.

Experts calculate that the soaring temperatures killed over 1 billion sea creatures during the week the catastrophe unfolded. The New York Times describe it as “post-apocalyptic”.

Whether or not this week of unliveable heat was caused by climate change is not up for debate, according to a team of scientists at the World Weather Attribution (WWA).

They conclude the global average temperature increase of 1.2 °C since pre-industrial times made the heatwave at least 150 times more likely to unfold.

“Here’s a strong warning that we have to study heat waves more,” says Friederike Otto, climate researcher at WWA and Oxford University.

“Climate change is an absolute game changer for extreme events — and models might not be a good indicator of what might still come in a warming world.”