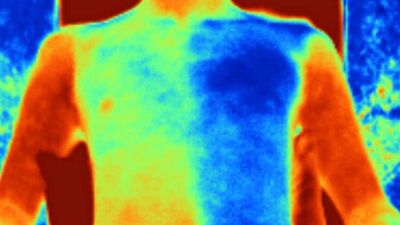 A garment containing the 'metafabric' was able to substantially resist the sun better than cotton   -   Copyright  Science / Huazhong University of Science and Technology
By Shannon McDonagh  •  Updated: 14/07/2021

A new type of fabric has been developed that radiates heat to keep people cooler in warm temperatures.

Scientists at the Huazhong University of Science and Technology in Wuhan, China, have come up with this “metafabric” by combining tiny fibres of Teflon, titanium oxide, and polylactic acid in with larger fibres used to make clothing.

If successful, the discovery could contribute to alleviating the discomfort suffered by people coping throughout rising temperatures.

The size of the particles has been engineered to each serve a different purpose when acting as radiators. Teflon and titanium oxide reflect ultraviolet light in a manner similar to sunscreen, while the polylactic acid emits infrared light, instead of containing it in the way warming climates do.

How does the fabric work?

The team had a participant sit in the hot sun wearing a garment consisting of two halves - half metafabric, half cotton, to see what happened

Results show that the smart fabric is most effective when it is white, though there is potential to dye it in different colours. It works most efficiently when in contact with skin and its impact on the cooling process would be considerably lessened if layered on top of a person's normal clothes.

Even more impressively, the fabric worked in abundance when used to protect a car from high temperatures.

When left in the sun from 11am to 1pm, the temperature crept up to 60°C in the uncovered car, 57°C in the car with the standard cover and only 30°C in the one with the metafabric.

The unprotected temperature is not far off the peak temperatures up to 71°C vehicles can reach in direct sunlight - hot enough to fry an egg or cause third degree burns.

The rise of cooling fabrics

Global clothing brands have taken an interest in Tao and his team’s discovery, and there are goals in place to integrate the smart fabric with marketable products we buy and use every day.

Their work could join the ranks of patented cooling fabrics developed by the likes of eco-manufacturers Polartec, used in clothing by everyone from Adidas to Prada.

“This technology can be seamlessly connected with mature, modern manufacturing,” says Tao.

“We hope that our products will be available in a year or so.”