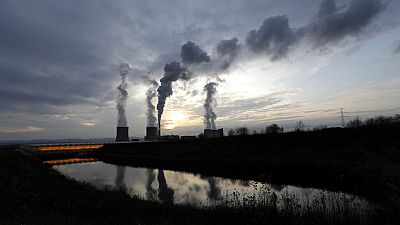 Smoke rises from the chimneys of Poland's Turow power plant in November 2019. The International Energy Agency warns record levels of CO2 emissions could be recorded by 2023   -   Copyright  Petr David Josek/AP
By Euronews  •  Updated: 20/07/2021

The highest levels of greenhouse gas emissions in human history are set to be recorded in the next two years, the International Energy Agency (IEA) has warned.

Forecasts newly released by the IEA on Tuesday predict carbon emissions will rise again this year and next, with the level in 2023 expected to surpass the record set in 2018.

The grim projections come as governments were criticised for having failed to invest in green energy as part of efforts to rebuild economies after COVID-19.

In the aftermath of the 2020 lockdowns, the IEA has warned, global carbon emissions are "already bouncing back, along with the overall economy, with 2021 on course for the second-largest yearly increase in history".

Even if action taken is now, the body said that achieving net-zero emissions by 2050, a key stated target of the Paris Agreement, could still be out of reach.

If countries proceed according to the same policies as they had in place in 2020, net emissions are expected to rise to a vast 34.7 gigatonnes of CO2 by 2025 - up from lows of 31.4 last year.

But even if every state perfectly followed the sustainable recovery plans set out by the IEA, emissions could still stand at a record 33.9 gigatonnes of CO2 in three years' time, the body said.

The IEA has launched a new 'sustainable recovery tracker' to measure how governments’ responses to the COVID-19 crisis were affecting clean energy investment and CO2 emissions.

It found that so far, just 2 per cent of all coronavirus-related fiscal support - a total of about $380 billion worldwide - has been committed to clean energy transitions from 2021 to 2023. This is only 35 per cent of what the IEA says is needed to be on track for net-zero emissions by 2050.

The IEA has also warned of sharp disparities between developed nations and emerging ones, with wealthier countries earmarking an average of $76bn a year from 2021 to 2023 for clean energy, compared to $8bn in developing nations. About 90 per cent of the forecast growth in emissions is expected to come from the developing world.

Executive director Fatih Birol said: “Since the Covid-19 crisis erupted, many governments may have talked about the importance of building back better for a cleaner future, but many of them are yet to put their money where their mouth is.

"Despite increased climate ambitions, the amount of economic recovery funds being spent on clean energy is just a small sliver of the total. Governments need to increase spending and policy action rapidly to meet the commitments they made in Paris in 2015."

Where next on COP26? Here are some ways forward | View