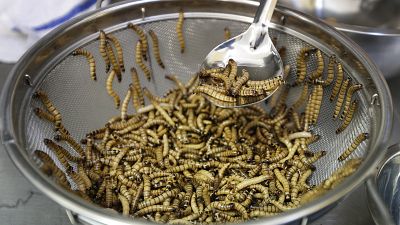 Insects could soon hit Europe's supermarkets and become part of our daily diets.

This is the first time that EFSA, an independent agency of the EU that monitors the food chain, releases a complete evaluation of an insect-derived food product.

The decision is now in hands of the European Commission, which has the power to authorise the introduction of so-called novel food in the EU's single market.

Under current EU law, any food that was not consumed "significantly" prior to May 1997 is considered to be a novel food. The category encompasses food from new sources, new substances used in food and new ways and technologies for producing food.

If the Commission ends up granting the green light to yellow mealworm, European consumers will soon be able to find the ingredient in edibles such as snacks, biscuits, protein components and legumes-based and past-based dishes.

However, a deep-rooted aversion to bugs might prevent the mealworm from being welcomed in Europe's kitchens, at least in the short term.

A 2020 study of the European Consumer Organisation (BEUC) conducted across 11 EU countries found that "as little as 10.3% of consumers on average would be willing to replace meat with insects (76.8% would not, 12.9% are unsure)."

Plant-based meat alternatives, such as plant-based burgers, which have been available in the market for years, enjoy greater acceptance among citizens.

"I think we have to make very nice good food that tastes good. I think that for people it's very important that, when they eat a burger with mealworms, it has to be a good burger," Lies Hackelbracht, the owner of TOR Royal, an insect production company, tells Euronews.

The fight against climate change could help gather support for this alternative nutriment.

The same BEUC study showed that two-thirds of consumers are open to changing their eating habits for environmental reasons, with over 40% of respondents claiming to have either stopped eating red meat or reduced their intake.

Red meat has become the target of intense criticism as climate change awareness increases around the world. Livestock represents 14.5% of all greenhouse gas emissions; the majority of these coming from cattle (raised for both beef and milk).

"When we are 9 billion people, it won't be possible to let everybody eat meat, so we have to search for other possibilities with a lot of protein and it can be in plants, but it can also be in insects," remarks Hackelbracht.

The insect industry is confident that the lower environmental footprint of insects, together with their nutritional benefits and the growing demand for high-protein food, will push the sector forward in the coming years.

The industry predicts that the number of Europeans consuming insect-based food will skyrocket over the next decade, reaching a total of 390 million by 2030.

Farmers share the optimism and see lucrative opportunities on the horizon.

"I think within a couple of years it will grow, and it's very important that there is now legislation because before we didn't have any legislation even, so we can take another step towards making insects popular," Alexander Maroy, owner of Nusect, a Belgian insect farm, tells Euronews.

At his farm, Maroy grows a host of bugs, including mealworms, crickets and locusts. For the time being, his products are meant just for animal feed. But he is convinced that, as the EU approves more novel products for human consumption, Europeans will adapt their palates and openly embrace the insect cuisine.

Insects could be the next hot ingredient used by European restaurants