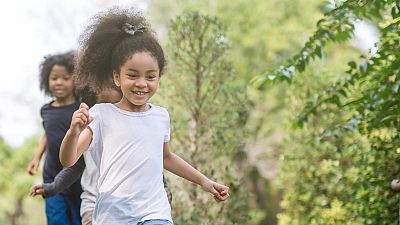 Children with greater access to green spaces were found to have higher IQs in new research.   -   Copyright  Getty via Canva
By Marthe de Ferrer  •  Updated: 24/08/2020

Children who are raised in greener environments have higher IQs, according to a new study in Belgium.

Researchers at Hasselt University analysed over 600 children aged 10-15 from different areas and found that there is a direct correlation between IQ and access to nature. Just a three per cent increase in the greenness of a child’s neighbourhood raised their IQ score by 2.6 points on average.

Interestingly, this pattern was identified in children from all socio-economic backgrounds. This suggests that the relationship between nature and cognitive development is not solely related to the child’s upbringing and financial background. However, it is important to recognise that regular access to the outdoors is a privilege, as Tianna Johnson wrote for Euronews Living earlier this year.

The cause behind the correlation is still unclear, but the research team has posited that children who live in greener spaces have lower stress levels, experience less noise pollution and have more opportunities for social play.

“Our results indicate that residential green space may be beneficial for the intellectual and the behavioral development of children living in urban areas. These findings are relevant for policy makers and urban planners to create an optimal environment for children to develop their full potential.”

Other studies have previously noted the relationship between cognitive development and the environment, but the Hasselt University paper is the first to directly measure IQ against green space.

A study in Barcelona in 2015 found that increased greenery in a child’s home, on their commute to school, and in schools themselves directly corresponded to children’s working memories and attention spans. The research concluded that green spaces boosted their cognitive outcomes because, the team argued, young brains were more protected from air pollutants.

As the study highlights, in 1950 less than a third of the world’s population lived in urban areas. Now, more than half the planet lives in cities, and this figure is predicted to rise to 68 per cent by 2050.

The importance of greenery in urban spaces has been well-documented; from helping us live longer to preventing our cities from becoming urban heat islands, to limiting air pollution - trees, parks, and plants are all essential to urban human health.

But improving access to outside spaces is a major undertaking. Extinction Rebellion activist Blue Sandford, who has recently written a book for XR Youth, believes we need to rewild cities like London.

“There aren’t enough green spaces, and there’s so many abandoned spaces you can make into parks,” she explains.

“And there’s also lots of green spaces that aren’t wild. Like perhaps there’s a lawn in the middle of a square, but no one’s allowed to use it, which is such a waste.”

Nature as part of education

Schools are an essential part of ensuring children who live in urban environments have access to nature. There are schools which fully embody a green ethos, like Green School New Zealand, but for inner-city schools, it is still just as important - if not more so - that students have access to outdoor space.

“As educators we should be cognisant of the fact that we should be developing a well-rounded, environmentally ground and respectful citizen,” says educational consultant and former headteacher Jo Heywood.

“How can children know this from inside a classroom alone? Outside space for growing, exploring, and developing is vital no matter how small or large if we are to teach our young what they have and what they need to protect and respect.”

Heywood’s daughters attend a school with a dedicated outdoor learning programme, which functions within the curriculum. “They learn to whittle sticks, make dens, produce art with nature, jump in muddy puddles, and climb trees,” she explains.

So as we continue to unpick the relationship between nature and intelligence - could greening our schools be central to boosting children’s long-term outcomes?