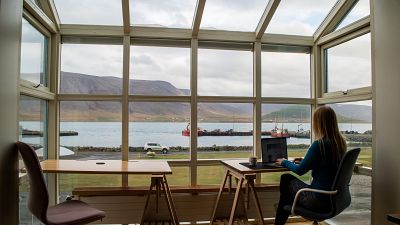 This week the results of a massive four day work week trial in Iceland were published. Carried out in 2015 and 2017, these experiments into shorter working hours have been described as an “overwhelming success” by researchers.

Just over 1 per cent of Iceland’s working population was included and they swapped from a 40-hour week to 35 or 36 as part of an ongoing initiative. The groups behind this groundbreaking trial wanted to find out what impact shorter weeks could have on wellbeing and work-life balance - as well as overall productivity.

Several years on, there are permanent changes to the way people in Iceland work. In 2021, 86 per cent of people now work shorter weeks or have contracts enabling them to reduce their hours. Employee wellbeing has increased in a number of ways from less stress and burnout to better overall health.

The report reveals that these changes come without a loss of productivity or revenue too.

Though sustainability wasn’t the key focus in Iceland, the news has important implications for those who believe a four day week could help minimise our impact on the planet.

With multiple experts extolling the environmental benefits of these shorter work weeks, these trials and those in Spain earlier this year show that cutting our working hours isn’t impossible.

Co-author of the report Jack Kellam says that in the future, sustainability could be an important element in changes to work-life in Iceland - even if it wasn’t one of the initial factors in the trial.

“They’re still likely to have had important effects around environmental sustainability, which might increasingly come into view as more workers in the country move onto shorter working hours contracts,” he says.

Kellam adds that one of the partners for the report and original campaigners for the trial in Iceland, the Association for Sustainable Democracy (Alda) has always seen a reduction in working hours as “an important component in moving towards a more sustainable future”.

The organisation believes that economic growth needs to make way for the demand for sustainability. Without changes to the way we think about production and consumption, it’s only a matter of time until Earth’s resources are exhausted. For our work life that means shorter working hours and fair pay.

“We in Alda have emphasised that shorter hours is important in relation to environmental issues,” explains Guðmundur D. Haraldsson, the report’s other co-author and a member of Alda’s board.

“If society is able to shift the usage of increased future productivity in the economy towards shortening the working week, we will have realised an economy that has much less impact on the climate and nature's resources.

“This applies to rich countries, first and foremost.”

What could shorter working hours mean for our carbon footprint?

Earlier this year, the 4 Day Week Campaign commissioned a report to look at how a reduction in working hours could help solve the climate crisis. Its aim was to find out if more freedom of choice in how we spend our time could be good for the environment.

So where did this reduction come from? Less energy consumption and cuts to carbon-intensive commuting are probably among the more obvious avenues but there are a few more unique ways that shorter working hours can help the planet.

Less time at work means more possibility for a society-wide move to low-carbon activities rather than using our hours outside of work to consume more.

Interestingly the report concludes that carbon emissions could be cut from the production of products like clothing, electronics and processed food. These sources often come from overseas, can be notoriously difficult to prevent and wouldn’t be produced without demand from consumers.

“Between 1990 and 2016 emissions within the UK’s borders reduced by 41%, but the consumption-based footprint only dropped by 15%,” the report reads.

“A reduction in working hours could play a key role in addressing these hard-to-decarbonise emissions.”

More free time could lead to a paradigm cultural shift in the way that we view abundance, it explains. Less time at work means more possibility for a society-wide move to low-carbon activities rather than using our hours outside of work to consume more.

It has already happened in France where a national measure to reduce the working week to 35 hours in 2000 has changed daily routines. With more time outside of the office, people have started to draw more value and wellbeing from time spent at home or with their loved ones.

Can working from home reduce CO2 emissions too?

More flexible work practices, in general, could be better for the environment. Fewer days in the office, whether it's a four day week or working from home, leads to less commuting.

For those who travel more than 6km every day, staying in their home office instead would cut their carbon emissions, according to the International Energy Agency (IEA).

If everybody able to work from home worldwide did so for just one day a week, it would save 1 per cent of global oil consumption from road transport.

If everybody able to work from home worldwide did so for just one day a week, it would save 1 per cent of global oil consumption from road transport.

If you took into account increased energy consumption from our laptops, phones and kettles during a mid-morning coffee break, it would still cut 24 million tonnes of CO2 every year - the equivalent of what Greater London emits every year.

In the grand scheme of things, this is a small reduction but it is just another piece in the grand puzzle of meeting long term sustainability goals as a globe.