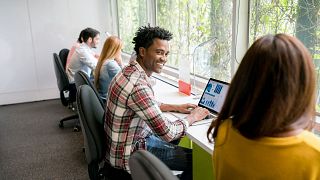 Work life balance is important, which is why some countries are trialling a four-day working week   -   Copyright  Getty via Canva
By Rosie Frost  •  Updated: 15/02/2022

With Spain poised to become one of the first countries in the world to trial a four-day working week, what impact could this have on the environment?

The plan will allow workers to spend fewer hours in the office, but with no reduction in pay. It's been put forward by left-wing party Más País which argues that longer hours don't necessarily mean higher productivity.

The proposal is for a three-year, €50m project that would allow interested companies to join the trial with minimal risk.

"With the 4-day work week (32 hours) we are opening up the real debate of our time. That always arouses controversy, because it opens a gap," said Spanish political scientist and politician, Iñigo Errejón of Más País, on Twitter.

What other issue is more important to occupy politics than the time in our life, he added.

The trend is growing

From countries to individual companies, more and more people are jumping on the four-day week bandwagon, hoping to increase productivity, enhance positive mental health and help the environment.

With more people working from home right now than ever before, revolutionary changes to working practices like this are becoming all the more feasible. New flexibility to choose where we do our jobs has many of us thinking about what the future might hold. Monday to Friday, nine to five, could soon be a thing of the past.

Dr Jan-Emmanuel De Neve, director of the Wellbeing Research Centre at Oxford University, believes that changes being made due to COVID-19 could be the first step towards a “revolution” that would see a four day work week become a reality for more people.

“I do think if there’s one silver lining, probably the biggest silver lining coming out of all of this crisis, it will probably be the potential for more flexible working hours and work from home practices,” he says. “I think in the future it would be very hard for a manager to say nope, you can’t work - say Wednesday afternoon or Friday from home - because we’ve kind of shown we can.”

If successful, Spain's adoption of a four day working week could be an exciting national experiment.

And it's not just the experts that are starting to think this way. A Facebook Live by Jacinda Ardern, New Zealand Prime Minister, received a lot of attention when she suggested the idea of reducing the country’s working week from five days, to four. It was part of a discussion about how to help the country’s economy to recover from the effects of coronavirus by giving people more time to do the things that they love.

A handful of individual companies are already ahead of the game. Jonny Tooze, head of marketing agency LAB, is one CEO who decided to offer his staff in London either Monday or Friday off every week.

From big corporations to small businesses, the four day work week community has been growing in recent years, but never has the model been trialled on a national scale.

The positive outcomes of working one less day per week go beyond just the personal pleasure of having another day of downtime, according to Dr De Neve.

“We also know it’s good for the environment because people are obviously less stuck in traffic.”

A 2012 study by the Henley Business School estimates that a four day working model would see employees driving around 560 million fewer miles every week, which in turn would reduce emissions from traffic. A wealth of other studies suggest that the shorter the hours we work, the better it is for the environment. Less need for office space because there aren’t as many people working at once, and reduced computer usage, for example, would mean a drop in the energy being consumed by businesses.

During Microsoft Japan’s 2019 trial of a four day work week, the company saw electricity costs drop by nearly a quarter and those who took Fridays off printed 60 per cent fewer pages. In the US, where working culture can be particularly intense, there have been suggestions that adopting shorter, more European working hours could cut past carbon emissions by 7 per cent.

During Microsoft Japan’s trial of a four day work week in 2019, the company saw electricity costs drop by nearly a quarter.

Beyond just the immediate, measurable effects on pollution, changes to working patterns also break the work-spend cycle. Instead of using the extra free time to shop, experts are finding that we’re more likely to engage in activities like, cooking, exercising or even fixing broken household objects that might have otherwise been thrown away.

When a shorter 35 hour work week was implemented in France in 2000, people spent their newfound free time on activities with low environmental impacts. They weren’t buying more or taking carbon intensive trips, but instead were spending time with family or enjoying local public spaces.

“There’s some wellbeing gains there too in addition to ecological benefits from these work from home practices and potentially a four day work week,” says Dr De Neve. “When you look at what makes people happy with their job or satisfied with life more generally, research has shown that work-life balance plays an important role.”

Some studies clearly show that in the current set up of the five day week the actual productive hours are only a fraction of that. But also there’s a lot of frustration because a lot of people are time-pressed.” Commitments to childcare, doctors appointments, and practical everyday tasks add to our stress because we simply don’t have the time to do them outside of work.

“We can take out some of that frustration and convert it into a wellbeing ‘dividend’.”

The wellbeing of LAB’s staff was a big motivator when the London-based company decided to make the switch to a four day work week. “We decided a couple of years ago, actually, that we didn’t want to just accept the status quo of traditional nine to five Monday to Friday work,” explains Tooze. “We thought that it wasn’t necessarily the most productive way of working and probably wasn’t the best way of working in terms of mental health.”

From full on apprehension to a sense of glee, staff had different reactions to the new schedule but most embraced their extra weekend day to take on life outside the office. Tooze says he has seen everything from short holidays becoming more common, to staff members building on interests like photography and even extreme marathon running to raise money for charity in their free time.

All in all, a positive outcome for LAB’s workforce - but what about productivity?

At the start, the transition brought about a lot of teething problems. The two shifts of employees became too separate and this created an “insane rush” to pass on information in the overlapping time period. LAB also decided to try and compress a 37.5 hour working week into four days, which came with worries about staff burning out.

More control over when and how they worked, however, eventually led to better efficiency. That has meant that LAB’s employees are less focused on how often they work and more concerned about the quality of what they are doing. Now almost everyone takes Fridays off because the efficiency gains mean there is less of a need to have that five day coverage.

LAB’s employees are less focused on how often they work and more concerned about the quality of what they are doing.

“It was a kind of non-communicated intentional consequence that, with people working 4 days a week, ultimately they would put less discretionary effort in because they just didn’t have time to do it.”

“So actually people were working less and that was one of our plans.”

But, with working culture often centred around rewarding those who spend the most time in the office, there are worries that working less could see some losing out financially.

“Businesses could start saying, wait a second can we dial back salaries on the presumption that people are now working four days rather than five,” explains Dr De Neve.

He’s hopeful that with a recentring on quality and not quantity, as has been the case at LAB, companies would continue to pay their staff the same wages. It would be an “unfair twist” to cut pay, precisely because cutting the number of hours people work actually seems to make them more productive.

It is the productivity that employees should be paid for, says Dr De Neve, not the amount of time they spend in the office.