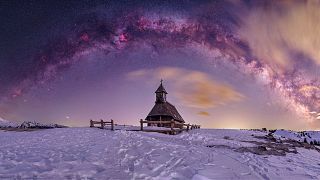 Space photography is an art form - layers of colours, textures, and shapes not visible to the naked eye come out through long exposure shots that can take hours to perfect.

Each year, Capture the Atlas asks astronomy fans around the world to submit their proudest moments capturing the wonders of the Milky Way galaxy.

The winning pictures are judged on the quality of the image, the story behind the shot, and the overall inspiration that the photograph can provide to fellow enthusiasts.

Distillations of these beaches, glaciers, and lakes, illuminated by the billions of stars that cloak our sky.

One thing that stands in their way? The looming impact light pollution is having on our natural scenery.

The overwhelming levels of light we project into our natural environments harms nocturnal ecosystems and inhibits our ability to see our skies. Its impact makes it harder and harder to produce work of this quality that represents our universe.

Scenes like this are hard to find across Europe and these pictures highlight their importance.

Here are some of the competition's highlights and the stories behind them.

Where in the world is best to take photos of the Milky Way?

"The deserts of the Southwest are abound with places to capture the night sky. With all that the Southwest has to offer, it’s easy to overlook some of the more obscure hidden gems hovering under the radar.

"This is one such location, which is situated below a remote set of cliffs in Grand Staircase-Escalante. Due to its remoteness, this natural stone chamber provides some of the clearest, most pristine views of the Milky Way framed by the copper-colored opening of the cavern."

"This glow is caused by the 'Calima,' a warm wind that comes from Africa, especially from the region of the Sahara Desert. This warm wind is always loaded with the sand of the desert and it has a big impact on night sky visibility, obscuring the sky and the beautiful Milky Way."

"I spent the pandemic in a remote valley on the southwest coast of Turkey trying to avoid the chaos of restrictions and lockdowns and be surrounded by beautiful nature instead. Sadly, the valley I was residing in has very steep walls and only a clear view west, but, as the Milky Way core rises in the southeast at this time of year, I had to hike up over the mountains to get a good view.

"The path to get to this location is part of the Lycian Way, a popular multi-day hiking trail along the incredibly beautiful coastline of Turkey. The view overlooks a beach known as 'Cennet,' which, translated from Turkish, means 'Paradise,' a name I completely agree with!"

"Tucked away in upstate NY, the Adirondacks region consists of 6 million acres of land designated as 'Forever Wild'. It is home to some of the last known darkest skies on the East Coast. I feel like I am home when I am hiking in the Adirondacks. This shot, then, captures the magic which I feel fills my heart when I am there.

"These mountains are constantly being swarmed with light pollution. The yellow glow on the horizon is light pollution from within the region as well as way off in the distance. My goal is to attempt to use my photography to raise awareness about the issue and restore the night."

"I hiked with my friend in the snow for around 3 hours, with 60kg (130 lbs.) of camera gear. Thankfully we had a sled, so we could pull the gear behind us. We spent the whole night outdoors under the starry sky at -10 degrees with a strong north wind, so I could barely feel my fingers on my hands.

"A great desire to photograph this beauty kept us upright all night, and in the end, we were rewarded with wonderful images. It was one of the most memorable nights I’ve spent capturing our galaxy."

"I captured this image last winter in the Riaño Mountain Reservoir in Spain. The biggest difficulty that night was mainly the cold; it was over -10 degrees. The moisture in the reservoir was freezing the lens and it was difficult to shoot for a long period of time.

"I planned the photograph using PhotoPills and, when the weather forecast was promising, I decided to try for it. The composition of the winter Milky Way over the mountains and the reservoir created magical scenery."

"You really couldn’t ask for a better foreground to work with! This image was taken in July, so I had to wait until a little past midnight for the proper alignment to begin shooting. Rather than going fully wide angle at 16mm, I zoomed in a little to 24mm, so the Milky Way took up more of the frame and I could capture only the most interesting area of the foreground. The sky was shot first using a star tracker."

"This is my favourite nightscape image to date. Mungo is a 12-hour drive away from my home in Sydney, but those Bortle 1 skies are the best I’ve ever witnessed and photographed at night. I had perfect conditions for three straight nights, with really good seeing throughout.

The moment I came upon this scene, I knew exactly what I wanted to the name the image. It was otherworldly – think Game of Thrones – and it lined up perfectly for how I wanted to capture it."

"This small Alpine lake is located in the Swiss Alps on a mountain pass. Most of the year, it’s closed due to snow but once it had cleared, I had to make my way there and capture the Milky Way.

"Ideally, it would have been better to shoot this location earlier in the year, as the Milky Way set quickly behind the mountain at that time. The sky here was a Bortle class 3 and I was also able to capture the beautiful green airglow."

"After numerous failed attempts to align it towards the south celestial pole, I was ready to give up, but I decided to take a shot and “see what happens” while the galactic core was rising up. Surprisingly, it worked out nicely, and a door opened for me, to a new magical world full of stars."