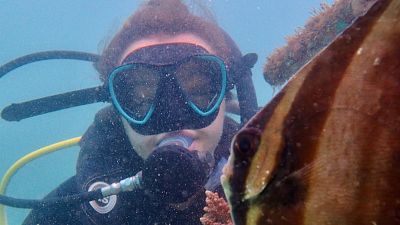 Marine biologist Rosalie Bailie graduated from university at the start of the pandemic. Since October last year, she has been working with Dutch NGO, REEFolution to restore corals in Diani, Kenya.

Reefs around the world face the threat of being decimated by bleaching as ocean temperatures rise.

"This heat in the water causes the corals to get sick and panic and they expel the little tiny algae that live inside," says Bailie.

They then bleach, turning white and leaving behind what is essentially a skeleton. If the algae don't return in time they die and these ecosystems are incredibly slow to recover. These tiny organisms coexist symbiotically with the corals providing them with 90 per cent of their energy.

"Indirectly coral reefs, although they actually take up 0.1 per cent of the ocean floor, 25 per cent of all marine life will spend some part of their life on these coral reefs," she adds.

Many coastal communities rely on these marine ecosystems as a source of food, jobs and income from tourism. They also provide protection by breaking down wave energy from storms or even tsunamis.

How do you 'garden' a coral reef?

In 1998 there was a mass bleaching event off the coast of East Africa that hit Kenya's reefs hard. The region lost 66 to 80 per cent of its corals.

Bailie has been working on a project to set up a new restoration site in Diani. Alongside her team, she has been 'gardening' fragments that naturally break off of corals due to strong waves or animals like turtles rubbing themselves against the reef.

"If it's just left in the rubble, it'll get covered in sand and it'll get smothered and it will just basically have very little chance of surviving," she explains.

"So what we do is we go on a dive and we take a big crate with us and we collect all these little bits that come off and then we use these to hang in a nursery."

Baby corals are hung in a nursery which looks like the branches of a tree. After six to nine months they are big and strong enough to be planted out.

To increase their chance of survival, the team from REEFolution uses artificial reefs made from recycled glass bottles. By increasing the biodiversity of the ocean floor, they are helping Kenya's coastal regions to resist the effects of global warming.

Watch the video above to find out more about Rosalie Bailie's work.