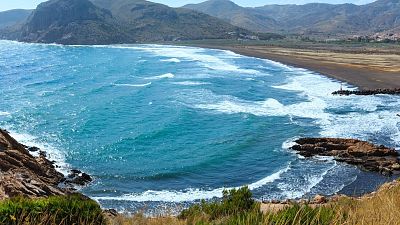 A Spanish non-governmental organisation (NGO) has pulled more than four tonnes of waste out of the Mediterranean Sea as part of a marine clean-up operation.

Marine Watchers Network Red de Vigilantes Marinos uses teams of volunteers including divers to clean up beaches and the seabed. This operation doubles as a data collection exercise in understanding marine litter.

At their most recent clean-up operation in June, more than 2000 volunteers collected between four and five tonnes of waste including tyres, steel pipes and a sink.

Originally started in 2016, the group is sponsored by recycling company Ecoembes. The organisation has grown from a subproject of NGO Oceanidas to an international operation which works in Spain, Peru, Brazil, Columbia and Cape Verde.

“It was just a little project among divers who were friends who were in love with the ocean,” says Laura Corredor, a marine biologist and professional diver who works with Marine Watchers Network.

“It was really little five years ago and with years and a lot of volunteers now we are a little bit bigger.”

It is estimated that 150 million tonnes of plastics have accumulated in the world’s oceans with 4.6 - 12. 7 million tonnes added every year. Laura says Marine Watchers Network is tired of seeing the damage this causes to not just animals, but ecosystems.

“Big animals like turtles, dolphins, seals, whales or sharks that suffer from ingestion of marine litter, especially plastic but not only that,” she explains.

Marine litter can transport species from one ecosystem to another for example from the Pacific to the Atlantic. This phenomenon, known as invasive species, can cause problems for other animals and habitats down the line. This also has economic and social implications for human beings.

“It is a cycle, it causes the death of an animal, damage to a full ecosystem and damage to us,” says Laura.

Marine Watchers Network is part of project Libera, set up by Ecoembes and Sea of Life in Spain. Libera is a fund that gives money to NGOs not only to perform clean ups but to gather data on marine litter.

Laura categorises all the litter collected during Marine Watchers Network clean ups and enters the data into the Marnoba app. This information is then passed to the Ministry of Ecological Transition.

“It is a way of doing citizen science. It isn't only about cleaning, it is about helping the scientific community to gather data'' says Laura. She adds that one of the big goals of Marine Watchers Network is to help people understand that they can contribute to scientific research.

“Cleaning isn’t the solution, of course it helps...but right now the scientific community is working to understand the problem but we don’t have a lot of data.

“The problem is so big and without borders that we can’t collect all the data that we want to.