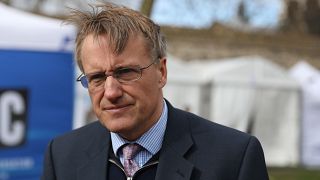 Christopher Sebastian is a journalist, technical writer, and digital media researcher. He is based in New York and Prague.

In a bizarre act of protest against COVID restrictions, UK Conservative MP Sir Charles Walker has vowed to [checks notes] carry a pint of milk.

The member of parliament for Broxbourne was one of 35 Tory backbenchers who rebelled against extending coronavirus restrictions for six more months - but the reason why milk is representative of his struggle remains unclear, perhaps even to himself.

Prior to the vote, he said “In the remaining days of this lockdown, I am going to allow myself an act of defiance, my own protest that others may join me in. I am going to protest about the price of milk. Now I’m not sure whether I think the price is too high or the price is too low, I shall come to that decision later. But for the next few days I am going to walk around London with a pint of milk on my person because that pint will represent my protest.”

Comments online range from mildly confused to extremely confused, but some people dared to speculate. Twitter user @AnxiousMillenm4 said, “I think it’s to give protesters the option to claim they were actually out to get a pint of milk to avoid trouble with the police, but he can’t openly say that so he’s using a flimsy excuse to suggest taking milk.”

Is there some signifiance in milk I'm missing? Can someone explain very slowly for the benefit of the hard of understanding.

That’s one assertion, but others think his milky protest might represent something more. In his interview with Cathy Newman on Channel 4, Walker claimed he didn’t choose milk as symbolic of his protest for any reason in particular.

However, using food products, especially milk, as a dog whistle for bigger political messaging is not uncommon.

Ecofeminist Carol Adams, author of the book Protest Kitchen, talks about the use of food products as symbols of political resistance but also notably of political repression.

In her work, she examines how our food choices are deeply tied to issues of justice, national security, and human rights.

It's already been embraced by the male-dominated right wing in the United States as a symbol of white nationalism.

Regarding Walker, Adams says, “Ironic that he uses milk as a sign of freedom. Of course, dairy milk, for the majority of people in this world, is actually a sign of colonialist nutritional policies that failed to recognise that it is only descendants of northern Europeans who have the lactase enzyme for digesting this milk. But it’s not surprising he chose milk from a dairy as a sign of freedom, as it's already been embraced by the male-dominated right wing in the United States as a symbol of white nationalism.”

And she’s not the only one to recognise that milk is coded as such. Jack Smith, writing for Mic, called milk the “creamy new symbol of white racial purity in Donald Trump’s America,” explaining how some people who identify or espouse white nationalist ideology conflate genetic superiority with the body's tolerance for dairy because people of northern European heritage are most frequently able to digest it.

The foodie front of the culture wars

Michael DeSoucey also talks broadly about food traditions and authenticity politics in the European Union, particularly in terms of identity politics, culture, and the complexities of globalisation. In fact, he popularised the term for it - gastronationalism.

In this context, milk becomes a prop to fight a front in the culture war. Dr Corey Wrenn, sociologist at the University of Kent, elaborated on that. She explains, “The COVID restrictions in the UK come on top of a longer lead-up to Britain's exit from the European Union, a move that was significantly influenced by ethnocentrist, imperialist sentiments about ‘Great’ Britain and the rest of the world. MP Walker's choice of milk for his personal protest is quite telling. COVID restrictions, like EU restrictions, are interpreted by some British nationalists to be threats to their ‘freedom’.

“MP Walker's pint of milk seems to symbolise a system of oppression and British entitlement now under threat,” she says.

Not all protest is made equal

There may be irony in the fact that Walker is using his creamy pint to protest a perceived threat to his freedom in a country where Metropolitan police were criticised for their heavy-handed response to women holding a vigil held for Sarah Everard, a young woman who was murdered in London walking home at night, just a few weeks ago. However, to be fair, he vocally opposed a sweeping bill introduced into Parliament that could potentially curtail protest and restrict civil liberties following the arrests made at that vigil.

That bill, by the way, already passed one hurdle in Parliament when it was voted through during its second reading last week following very strong debate.

MP Walker's pint of milk seems to symbolise a system of oppression and British entitlement now under threat.

But in a world where Extinction Rebellion groups protest ecological disaster, Black Lives Matter protestors take to the streets to fight against anti-Black racism, and women are arrested during vigils for women who die at the hands of male violence, the question becomes, where does the plight of Charles Walker fit in?

Is Walker a man who stands among the downtrodden and politically oppressed? Frankly, he didn’t make it clear. All that can be certain is that he does indeed take a stand, nobly, with his pint of milk.

As Walker poetically and heroically pontificated, “At the end of the day, it will be warm, it will have separated, and I can choose to drink it or pour it away because it will be robbed of its refreshing elegance by the time it has been in my pocket for 12 hours.”