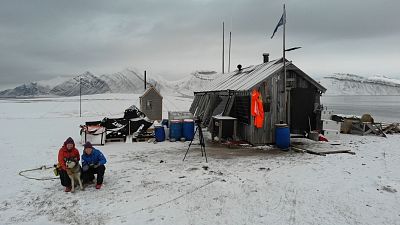 Sunniva Sorby, Hilde Fålun Strøm in front of the remote trappers cabin known as Bamsebu, where they ended up locked down during the pandemic.   -   Copyright  Hearts in the Ice
By Rosie Frost  •  Updated: 12/03/2021

This year, Sunniva Sorby and Hilde Fålun Strøm became the first women to overwinter in the remote Norwegian archipelago of Svalbard without men. 140 kilometres away from their nearest neighbours, the pair spent the entirety of winter and several months beyond in a 20 square meter cabin without running water or electricity.

After setting off in September of last year, the original plan was for them to return home in May - having spent nine months in the Arctic. But as it became clear how serious the COVID-19 pandemic was turning out to be, things rapidly changed. Their only updates from the chaos of the outside world came via their social media team.

“It might be akin to going to the moon with just one other person,” they tell me. Travel restrictions meant the ship carrying friends, family and their science partners would not be able to collect them, meaning they would have to stay a full year until September.

“You are cut off from life as you knew it. You leave a world where mediocrity is tolerated and you go to one where you are needing to show up with 100 per cent of your awareness and a sense of urgency with how you move and how you problem-solve.”

It is dark for three months straight during winter on Svalbard. Temperatures regularly drop to -30 degrees celsius. Polar bears make frequent visits to the cabin so everything left outside has to be bear-proof or they risk losing essential supplies. Snowdrifts can pile up, trapping the two women behind a wall of ice. Life is challenging and they are vulnerable.

Polar bears make frequent visits to the cabin so everything left outside has to be bear-proof.

But for Sorby and Strøm, persevering through the difficult conditions is a matter of making history as strong, capable women.

“Svalbard has a long history of traditions around overwintering and it has been male-dominated despite the fact that women have played major roles.” But, they say, this year was different. For the first time ever, it was an all-female team, alongside their dog Etta, spending the whole winter in these extreme conditions.

“It was time for us to rewrite history, to break with tradition up here and to show and share that we are strong, capable, resourceful and successful without men.

“We are just two examples of what is possible and we are doing it with heart and soul and our powerful network of other female leaders.”

Climate change exploration in the most remote location

A few months ago, Sorby and Strøm decided to once again head back to the remote trappers dwelling, known as Bamsebu, to continue collecting data for climate change research. After a few delays, they arrived at the cabin where they are now, in late November, to settle in for another winter.

“It was a hard decision in some ways to come back, but in some ways not, because we were some of the only field researchers up in Svalbard.”

The experiences of this year’s crisis have only reinforced Sorby and Strøm’s sense of purpose. They are hopeful that the fact we have all rapidly changed the way we live during the pandemic means the world can do the same in regards to climate change.

“In so many ways we’ve been able to connect with people because we were at Bamsebu and we were isolated and vulnerable,” they say. They created their citizen science project, Hearts in the Ice to spark a conversation about climate change between students, researchers, businesses and environmental organisations - essentially anyone concerned about the health of the planet.

“It’s not a happy circumstance, but it's sort of highlighted why we're doing what we're doing.”

So what are they doing in the High Arctic? Bamsebu is located in the van Keulenfjord, one of just two fjords in the region that still experience sea ice formation. Scientists frequently study the area to find out how climate change is affecting melting sea ice but these projects are usually short and happen during the summer.

Sorby and Strøm’s long stay allows for year-round observations, which permits scientists to better use the data they have. And that’s not all. From polar bears to microscopic organisms, Hearts in Ice has been involved in seven different international climate change research projects.

They have used cutting edge drone technology to collect important temperature information, surveyed phytoplankton which provide food and oxygen to the world and helped NASA to better understand the magnificent northern lights.

“We were also able to photograph a rocket launch on December 10, 2019 for NASA as we were in the most ideal location for this- thus rendering us ‘Rocket Citizen Scientists’.”

A dry run for space travel

The isolation these women experienced in the Arctic is also providing information on how we as human beings cope with extreme working and living conditions.

This important research could help experts at the European Space Agency and NASA choose astronauts capable of taking on missions to the moon, Mars or even planets that are further afield.

The “toughness” of what Sorby and Strøm have undertaken makes them perfect candidates for investigations into how we cope with isolation, the pair explain. Although the pandemic may have changed their plans in some ways, their experiences can help guide mental health services for those who have been under lockdown measures for extended periods of time.

The women say they are happy to have provided hope for those trapped inside all over the world.

“While we are here, we are operating from a place of deep connectedness to our environment. We cleaned out all the cobwebs in our own emotional mental closet, and so when we wrote our blogs together, we wrote from a place of clarity, and a place of authenticity.

“I think just by showing our vulnerable selves and what we were experiencing, especially in March, many people have since said that we were like the little light at the end of the tunnel for them, which is nice to hear.”

They hope that their example and the experiences of this year show others what is possible. How we can work together to change the future together as citizens of the world, how we can all “embrace the planet” and answer their call to action.

“I think we've really connected with people and managed to inspire them to commit to take action in their own lives,” says Sorby. “We need leaders, but it starts with you and I.”

Sunniva Sorby and Hilde Fålun Strøm have written a book about their experience in the Arctic. You can find more information about it and a number of other ways to donate in support of their citizen science work here.