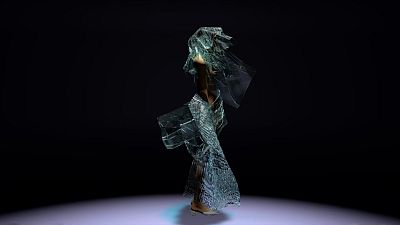 The fashion industry is known to be a high polluter and discarded clothes is one of the main problems, with some fabrics taking 200 years to decompose. A graduate of Central Saint Martins art school has found a solution, creating a biomaterial made from algae that decomposes in just a few hours.

She has designed a glass-like dress made from the biomaterial using 3D technology and algorithms. Thereby saving the wasted time and fabric that comes with the normal design process.

The only problem? You can't wear it out in the rain. "When it rained, it just disappeared," Scarlett Yang says, laughing. But she found a clever way round the problem, "I came across silk protein, which is now one of my main materials. I discovered it on my visit to a textile mill in Japan. Talking to them I found out that they're throwing all this protein away." She combined the silk protein with the algae extract to create a durable biomaterial.

Despite just being at the start of her career, Scarlett has a bright future ahead as her design has won a prestigious sustainability prize from Louis Vuitton.

Algae is on the rise

Scarlett isn't the first to recognise the benefits of algae for clothing. New York designer Charlotte McCurdy created a type of plastic using algae, and used it to fashion a jacket which absorbs CO2 from the atmosphere.

Canadian-Iranian designer Roya Aghighi's clothes made from algae can turn carbon dioxide into oxygen via photosynthesis. Celebrities are also getting onboard, with Jason Momoa launching vegan sneakers made from algae.

Hoodie made of pomegranate and eucalyptus

But algae isn’t the only natural material that could have a place in your future wardrobe. British brand Vollebak turned pulped eucalyptus into a hoodie and dyed it using pomegranates.

The result is fully biodegradable and compostable, so the hoodie can be buried in the garden when it's no longer wanted. "Fast fashion and landfills define the industry. We need to get back to the point where you could throw your clothes away in a forest and nature would take care of the rest," says Vollebak co-founder Steve Tidball.

Click on the video player above to learn more about Scarlett Yang's design.