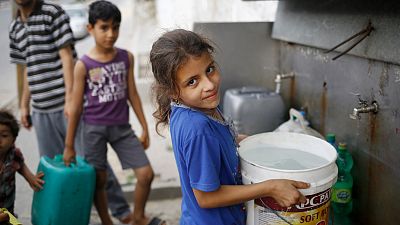 An Israeli company called Watergen has come up with a way to produce drinking water out of thin air, to help struggling Gaza residents.

The technological solution involves water generators which function like dehumidifiers. These produce 5,000 to 6,000 litres of drinking water per day, depending on the air's humidity, and can help anyone from remote rural village communities to private homes in the city.

So why is this necessary? The Gaza Strip has long lacked sufficient amounts of drinking water. Since the 2007 Hamas takeover of the territory, 2 million inhabitants have been faced with a border blockade by Israel. Chronic power cuts have led to increased water contamination and so people rely on local vendors who pump water from the ground and desalinate it before selling.

However, UNICEF estimates two-thirds of this water is already contaminated by the time it is delivered.

"Our goal was that everyone on Earth could be supplied with drinkable water... It was immediately clear that we had to help our neighbours first," says Watergen company CEO and president Michael Mirilashvili. It took Mirilashvili a year to get permission to deliver three machines to Gaza over the course of 2020, but he achieved it.

The generators have been installed in hospitals and public spaces for people in need in the Palestinian territories and are operated by the civil society group Damour.

Watergen has deployed its machines in over 60 countries. It specialises in helping developing nations lacking water infrastructure, such as India and Uzbekistan, but also in more developed areas suffering from drought, such as California.

Click on the video player above to learn more about this project.