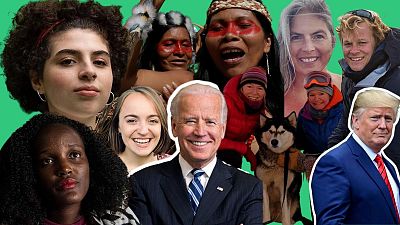 It has been an interesting year, to say the least. The pandemic has dominated our news feeds but stories about the climate crisis haven't been far behind.

2020 was meant to be a pivotal year for international cooperation on environmental action. We missed weekly climate strikes, COP26 was cancelled and a summit on the five year anniversary of the Paris agreement had to go online.

But that doesn't mean it has been all bad when it comes to environmental news. So to catch you up on some of the things you might have missed we have put together a list of the best, most breathtaking and inspiring stories we have published this year.

1. How did Costa Rica become the greenest, happiest country in the world?

This Central American nation has rapidly recovered from massive amounts of deforestation in the early 20th century. It took some bold steps to reverse the environmental damage and now protects around 5 per cent of the world's rapidly shrinking biodiversity.

We spoke to Costa Rica's tourism minister about how the country has been weaving together policies around health, education and conservation.

In January, Vanessa Nakate was cropped out of a picture with other climate activists including Greta Thunberg, taken at Davos. The incident led her to question why she was being erased from climate coverage.

For EU Green Week, Vanessa spoke to us from Kampala, Uganda about fighting for marginalised voices and ensuring the impact of climate change in the Global South are covered in the media.

3. What is the Blue Heart of Europe and why does it need saving?

The Vjosa is the last free-flowing river in Europe and snakes its way across Greece, through Albania and the Balkan mountains before reaching the Adriatic Sea.

A 'hydroelectric goldrush' was threatening the untouched river earlier this year until the campaign to save Europe's blue heart put an end to subsidiaries for small hydropower plants.

We spoke to campaigners earlier this year to find out why dams on the Vjosa would be a disaster.

4. ‘The earth expects you to respect her’: Meet Indigenous leader Nemonte Nenquimo

Nemonte Nenquimo was named one of Time magazine's most influential people of 2020. The first female leader of the Waorani people, she became an international voice for Indigenous people as she fought to protect the Amazon rainforest.

CBD or Cannabidiol seems to be in everything these days. From pet products to moisturisers, tampons and shampoos, the evidence behind why it is being put in products or how much CBD is really in there isn't always clear.

Earlier this year we spoke to some industry expert about what claims are fact and which are fiction.

6. Is your pension investing in fossil fuels without your knowledge?

Have you ever thought about where your pension money is going? Three-quarters of working people admit to feeling too confused to make "informed decisions".

Chances are though that your money is being invested in coal, oil and as companies. In the summer we took a look at some of the ways you might be able to make your pension more sustainable.

7. Young people of the Amazon are the real guardians of the rainforest

Fabio Gondim lives in the community of Bauana deep in the Amazon rainforest. He is just one of many young people choosing to remain in their rural community to protect the forest rather than moving to the city.

8. The 18-year-old activist changing the climate conservation in the UK

At the global climate strike in March 2019, Noga Levy Rapoport grabbed a megaphone from a fellow protestor and shouted: "follow me!". Before she knew it she was leading a group of young people through the streets of Westminister demanding action from the UK government.

We caught up with her earlier this year to talk about how she and other young climate activists are changing the environmental conversation all around the world.

9. ‘Most of our time is spent outside’: would you send your kids to a green school?

At the base of Mount Taranaki in New Zealand, a unique school teaches 50 students everything from Maori history to mathematics. CEO, Chris Edwards gave us an insight into a day in one of the Green Schools outdoor classrooms.

So how did someone with his CV end up in this unusual job and why is he trying to prevent the movement from becoming a whitewashed playground for the rich?

10. Inside the Leicester sweatshops accused of modern slavery

July saw fast fashion giants Boohoo accused of modern slavery as it emerged that garment workers were being paid just £3.50 an hour. They had recorded extraordinary sales in the first few weeks of lockdown but this bonus didn't seem to be being passed on to the people actually making the clothing.

We found out what it was like for people inside these factories and the conditions they were working in. Check out our joint investigation with Euronews English.

11. What’s it really like to film documentaries for David Attenborough?

Have you ever wondered what it is like to be behind the camera shooting stunning nature documentaries that move the world? Bertie Gregory knows and we caught up with him to find out how he channelled his childhood obsession with wildlife photography into a unique career.

His stories about sailing through terrifying storms and saving grizzly bears in British Columbia are not to be missed.

12. ‘My poems are not nice’, Ella Duffy explores the sinister side of nature

London-based poet, Ella Duffy, explained to us how she believes the arts and the climate crisis are linked. She told us about her first published collection- a single narrative poem detailing the story of one of the world's rarest plants.

“Our relationship with the natural world is such a difficult and complex one, balancing the ways we harm it while being desperate to maintain it," Ella explained in August before the publication of her second book, Rootstalk.

"I mean, we’re in an age of houseplants - but at the same time are destroying the outside world!”

13. What a mission to Mars can teach us about protecting planet earth

It might have passed you by with the year we've all had, NASA launched a mission to Mars this year. Although the Perseverance Rover will mainly be looking for signs of life on the red planet, they are also testing technology for a manned mission.

Just as the rover launched out of the atmosphere, scientists at the European Space Agency's MELiSSA initiative told us how this tech can benefit our fight against climate change.

14. The architect who wants to build cities with a million trees

Urban forestry provides an ecosystem which cleans air and fights against rising temperatures. Having access to green spaces in the city can also improve your health and have a positive impact on your life expectancy.

Italian architect Stefano Boeri has launched a campaign to promote urban forestry. Check out the incredible imagery in this video looking at the campaign to build a city with a million trees.

Wild swimming took off this year with pools closed and people itching to exercise in the water during the warm summer months. Floating in the wild waters can be a unique restorative experience.

For this piece, we found three people who regularly swim in seas, lakes and rivers to tell us how the experience helps them to connect with nature.

16. What is fracking and why could it swing the US election?

The US election dominated the news in October and November. Environmental issues were top of the debating list for many voters on November 4th.

In the run up to the big day, we took a look at what fracking is and why banning it became such a controversial topic for both presidential candidates.

17. There is an elephant baby boom going on in Kenya

18. Chernobyl: Why the nuclear disaster was an accidental environmental success

It seems like a lifetime ago that we all became obsessed with Chernobyl. The Emmy award-winning series sparked our interest but beyond the nuclear disaster what is happening in the region?

The exclusion zone established around the power station and city of Pripyat saw 117,000 people evacuated from the highly contaminated area. We spoke to scientists and conservationists about the incredible environmental recovery that has resulted from the 35 year absence of people.

19. ‘Strong and successful without men’: Why two women spent a year in the Arctic

"It might be akin to going to the moon with just one other person."

Hilde Fålun Strøm and Sunniva Sorby were trapped in the Arctic after the coronavirus pandemic prevented the ship that was meant to pick them up from taking them home. They had been carrying out citizen science looking at the effects of climate change in the region,

After becoming the first women to overwinter on Svalbard in Norway without men, they have returned to the remote cabin for another winter.

After a campaign backed by "Goddess of Pop" Cher, the world's loneliest elephant was rescued from a dilapidated zoo in Islamabad, Pakistan. Kaavan made his way to Cambodia where he will spend the rest of his days at a sanctuary.

Amir Khalil, a veterinarian from the charity Four Paws International which helped to coordinate his release, spoke to us about Kaavan's journey to freedom.

If you've made it this far through our 20 for 2020, we want to offer our thanks for reading Living in this unusual year. Thank you for joining us as we told some of the most important stories about the climate crisis from around the world.

From inspiring changemakers to innovative sustainable solutions and conservation wins, we covered it all. Here's to 2021 being another year of cutting edge environmental content.