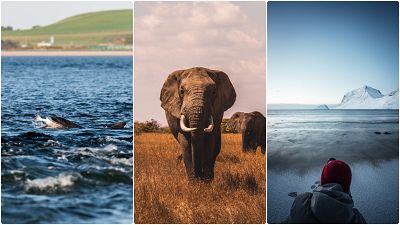 Streaming culture has given rise to a new generation of documentary lovers. Better informed than ever with more films available than ever before, it can be difficult navigating the sea of choice.

But with climate change chief among concerns for the Netflix generation, it can be difficult choosing which eco-themed documentaries to watch without coming down with a case of eco-anxiety.

Here we list some of the best picks to get a rounded view on the problems of today as well as potential solutions.

Canadian conservationist, professor and paddler Mark Angelo heads out on a three-year river journey around the world to document the damage caused to the world’s water supplies by the fashion industry. In this feature length documentary, he investigates the so-called hydrocide, in which toxic chemicals are dumped into rivers and seas as a result of humanity’s quest for fast fashion and killing off water habitats.

Be warned. This trailer contains fairly graphic images of the fish processing industry from the beginning. If you'd rather skip that part, start the trailer from 16 seconds in.

A pescatarian diet is often presented as better for the environment than a meat-heavy one. But that doesn’t take into consideration the impact of the global fisheries industry, found the makers of Artifishal. They investigate the impacts of over fishing and how our taste for seafood is devastating wildlife below the surface everywhere from the Pacific Sound to the fjords or Norway. As they say, ‘the road to extinction is paved with good intentions’.

Leonardo DiCaprio voices this film considering potential for mass extinction as a result of Arctic methane gases seeping into the air as the icecaps melt. It’s a beginners’ guide to the scale of the potential catastrophe, setting out on the hunt for technologies that might reverse the the damage caused by CO2 leaking into the atmosphere.

Watch it on HBO.

Considering that climate change is unlikely to affect all countries equally, this feature asks who will be hit hardest? And when that time comes, what will the ramifications be? From droughts and famine to rioting and issues of national security, Climate Refugees lays out how overpopulation and climate change could meet to spell disaster.

DiCaprio was also a key driver of this film, alongside other Hollywood bigwigs including Martin Scorsese. Before The Flood follows the actor around the world to document those impacts of global warming already visible, while challenging climate change deniers in the US political establishment.

It's available on iTunes.

Humans have quite literally carved space out of the Earth to accommodate ourselves. Epic vistas of human-made landscapes give way to scientists arguing that the makeup of our planet’s surface has been so profoundly changed that we are no longer living in the same geological time period as our grandparents. Citing the concrete barriers that now form 60% of China’s coast to the destruction of the Great Barrier Reef, this film is the conclusion of 10 years’ research finding the world is irreversibly changed.

Find out where to watch it from where you are.

In Slovenian, The Undamaged explores the measures being taken to protect some of the world’s last remaining wild rivers in Europe’s Balkan countries. A crew of kayakers are on a mission to protect those pristine specimens from the threat of almost 3000 dams. Taking to the waters on a voyage from Slovenia to Albania, the group join activists and local groups fighting to preserve the waterways.

Getting back to nature may not seem like an option for many, but it became a reality for American couple the Chesters. In contrast to the doom and gloom of many documentaries confronting the state of natural world, this film’s feel-good vibe explores the trials and tribulations of going self-sufficient and putting your future in nature’s hands.

9. The River and The Wall

The idea has dominated the last few years of US politics: a wall along the Mexican border. Five friends come together to travel the length of the Texan border to find out the impacts of such a massive project on the environment.

Watch it on iTunes.

Undercover journalists, environmentalists, scientists and investigators team up with the Mexican navy in a desperate attempt to save the last remaining vaquitas - a species of porpoise native to the Gulf of California. Under threat from Mexican drug cartels and Chinese traffickers who are poaching in the region, Sea of Shadows makes for a non-fiction cinematic thriller in pursuit of justice.

It’s no secret that ivory has been big business for years. But while many countries have banned its import and trade due to its devastating impact on Africa’s elephant population, it remains a symbol of affluence in China. Undercover filmmakers infiltrated this murky world to document the deep-rooted corruption fuelling the trade.

Watch it on Netflix.

A portrait of one of the most densely populated metropolises on Earth during one of its hottest months on record. It’s humid, it’s uncomfortable, but that’s nothing compared to residents’ growing anxiety on how to make ends meet day to day. It’s a depiction of how big picture problems might be forgotten when faced with the everyday grind of existence.

In the decade since the release of An Inconvenient Truth, a lot has changed but not necessarily for the better. What hasn’t changed is former presidential candidate Al Gore’s determination to draw world leaders’ attention to environmental threats. He’s continuing his mission to convince governments to invest in renewable energy while battling misinformation on environmental issues.

Coral reefs are disappearing at an alarming rate. Barrier reefs are retreating while others are bleaching in warming oceans. The makers of this documentary are convinced that unravelling the secrets of the deep can reveal what lies ahead for the health of the oceans.

Watch it on Netflix.

Rather than considering the problems, director Damon Gameau is determined to search out solutions to climate change rather than focusing on the problems. Driven by hopes for his daughter’s future, he hunts out the technological breakthroughs that could reverse the impacts over the next 20 years.

Based on Naomi Klein's bestselling book, This Changes Everything surveys environmental activists around the world from Canada, through Europe and into India and China. Filmmakers question whether the climate crisis can be tackled in the current era of capitalist greed overshadowing corporate responsibility. Characterised by stark contrasts between boardrooms and crisis zones, the quest to make money seems to have resulted in a hostile attitude to nature.

Check out the viewing options here.

17. How to Let Go of the World and Love All the Things Climate Can't Change

Documentary-maker Josh Fox is behind this first person journey across the world investigating the impact of climate change. Travelling to 12 countries across six continents, the film confronts the ugly truth that the tipping point for some of the worst impacts of the climate crisis may already be far behind us. Instead, it focuses on what will remain when our worst fears come true.

Choose how you want to watch here.

18. How To Change the World

Recounting the birth of activism mega group Greenpeace, this film explores the tipping point that led a group of young people to put everything on the line to halt atomic bomb experiments in Alaska. Centring on eco warrior and Greenpeace co-founder Robert Hunter, the film features previously unseen archive footage dating back to the early 1970s providing dramatic flare and encouraging viewers to consider what, if anything, has changed.

In an attempt to debunk the prevailing wisdom suggesting clean energy isn’t profitable, unemployed workers in the US and with titans of business in China are battling to lead the race to renewable energy. Reluctance to take up such technology is tempered with a host of success stories from Germany and India where the business is booming.

French filmmakers Mélanie Laurent and Cyril Dion have a singularly optimistic view on how to tackle the challenges of today. Seeking out creative alternatives to our current norms of education, agriculture, energy and economics, it seeks to inspire people to make local changes and use the power of numbers to impact on a global scale.

Which tree did voters root for in European Tree of the Year 2020?

Living Recommends | No one is too small to make a difference

Living Recommends | Turning the Tide on Plastic by Lucy Siegle