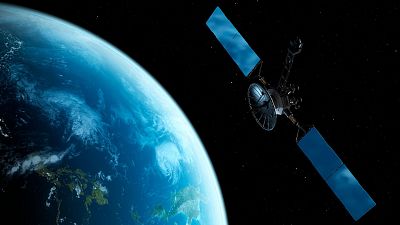 Satellites and technology are being used to meet the UN's sustainable development goals.   -   Copyright  Getty via Canva
By Rosie Frost  •  Updated: 09/11/2020

The UK Space Agency has been given an award for using satellites and space technology to find solutions to sustainable development challenges.

The IPP has already funded 43 projects in 47 countries across Africa, Asia-Pacific and Latin America. These projects use satellite technology and data to tackle problems such as deforestation, resilience to the real-world effects of the climate crisis, and renewable energy.

One of the sponsored projects is Forests 2020 which was set up to protect and restore up to 300 million hectares of tropical forests around the world. Local partners in Brazil, Colombia, Ghana, Indonesia, Kenya and Mexico were supported by scientists in Edinburgh to set up Earth observation laboratories.

It ended in March this year with a series of key achievements for the environment. The project helped to develop a system for quickly monitoring deforestation, methods for working out the risk of forest fires three to six months in advance and mapping for the carbon storage capacity of restoration projects.

A report from the IPP released in August found that its projects had so far had “direct, measurable impact on ten UN SDGs” particularly in the area of disaster resilience. Countries in the Global South are on the frontlines of the climate crisis with numbers of natural disasters increasing worldwide over the last 20 years.

Floods have doubled and - alongside storms, they have become the most frequent kinds of disasters of the last two decades. Ten different IPP projects have helped to target resilience against disasters like these, including providing plans for managing flooding in Malaysia and a tracing system for reuniting displaced families in the Philippines.

“We are immensely proud to receive this award, in acknowledgement of our focus on using satellite technology to benefit humankind,” says Afriqnmun Lovejoy MBE, Head of Sustainable Development at the UK Space Agency.