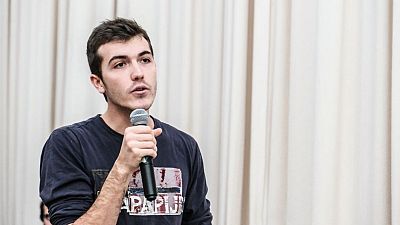 “It's a fight. We are clearly not being included in the policymaking processes to the extent that it's needed.”

Nathan Méténier passionately explains to me what he believes young people’s role is when it comes to shaping our futures.

“We are being listened to, but not heard,” the 21-year-old adds.

When it comes to youth mobilisation and harnessing the power of young voices in the climate movement, there are few people as well-versed as Nathan.

He currently serves as part of the UN Secretary-General’s Youth Advisory Group on Climate Change, is the Europe Director of Youth4Nature, and co-founded Generation Climate Europe last year, the largest coalition of youth-led NGOs in the continent.

With a CV this impressive, it’s easy to forget that Nathan is also a student. He is currently working on a Master’s degree in environmental politics and regulation at the London School of Economics. This is something the major figures he works with also seem to forget too.

“Often policymakers act with us as if we were normal stakeholders, and this is a big part of our fight, saying ‘no! We’re not normal stakeholders, we’re students! My life is about going to school, having my friends, doing things that students do,’” he says, “we are not like the others that work from eight to five. We work during weekends and during the week and have to just adapt.”

Despite the challenges, Nathan believes young voices are an essential part of this movement. For youth activists, the change we vitally need to protect our planet in the long-term is not an abstract future goal.

“When we talk about 2050 it’s not such a far target,” he explains, “it might be a far target for those who are designing the policies now, but for us - we will be 50, so it’s tomorrow, right?

“2050 is something we can imagine. So I think it’s very important that we go for very concrete action: what do we want at a city level? What do we want at a local level? Can we design the policies we need, to really shape the 2050 we want to have?”

Ensuring ideas, policies and practices are tangible is at the centre of Nathan’s activism. Everything he does is about creating a future we can all envision. Something ephemeral is ultimately impossible to achieve in his eyes.

Growing up alongside the effects of the climate crisis

Though he lives in London now, Nathan is originally from Grenoble in the French Alps. His home is experiencing climate change at double the rate of the rest of Europe.

This firsthand experience of the global crisis helped shape his understanding of how to tackle the problem too. Nathan believes it’s vital to engage with policymakers and stakeholders from a local level upwards, using the voices and positions of those around him.

It’s a way of making sure we are all on the same page, and we are all fighting for the same goal and empowering young people together.

“I understand how important it is, when you are at the grassroots level and you’re trying to make a change and convince politicians of the climate emergency, to talk to policymakers and to other stakeholders,” he explains.

“I got very into the European youth climate movement, and ended up co-founding an organisation called Generation Climate Europe, which is basically a coalition of different youth networks. It’s a way of making sure we are all on the same page, and we are all fighting for the same goal and empowering young people together.”

Compared with other young activists I’ve interviewed and worked with, Nathan is by far the most actively involved in policymaking. We tend to focus most on the school strikes and visible protests, rather than the quieter work going on behind the scenes. I ask how he feels about the way young activists are depicted in the media.

“I don’t have a problem with the way we are portrayed,” he replies, “of course I go in very deep and we tackle questions that are sometimes extremely niche or people cannot necessarily understand without a background in that area.

“But at the same time I remain a campaigner, I remain a striker, I remain someone who would go on the street to take part in an action. For me, as activists, we have many, many different instruments and many different tools, which we need to embrace - while always asking for system change.”

Nathan sees the climate crisis as part of a far more complex and systemic problem. It’s here where he feels young climate activists could be doing more.

“We need to go further and do better when it comes to understanding that this is not just a climate crisis; this is not just a biodiversity crisis. It is a social crisis,” he says, “and you cannot address this complete, extraordinary challenge and dilemma that we’re going through without thinking about social issues, like inequality and democracy.”

Though discussions around social change could quite easily veer into more idealistic notions, Nathan is still quick to bring things round to practical ideas.

“When we’re asking for system change, this doesn’t mean ending capitalism or stopping economic growth,” he explains, “no, it’s about very concrete plans, and is about asking for the end of monopolies.”

“It’s asking for green deals, but being more ambitious when we do this too.”

His continued and refreshing focus on practical steps within climate activism is grounded in empathy too. He tells me about communities on the frontlines of the climate crisis, including the Indigenous Sámi people in northern Scandinavia.

“We have friends that are dying because of these policies, which is why - as a progressive force - we should be holding our progressive governments accountable, to put pressure on the others.”

The Sámi are faced with the very tangible effects of climate change - hence why we need tangible solutions, he explains.

“This is a big part of our work in the next year, to convince the EU to be much more ambitious when it comes to protecting communities in the Arctic, and to put pressure on the countries in Central Asia that are marginalising activists. The same for Brazil, the same for Sudan.

“I think this youth climate international solidarity has to become a bigger component of the work we can do.”