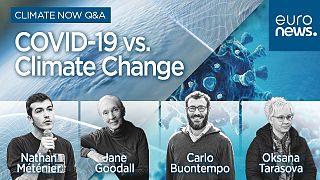 Both the coronavirus pandemic and climate change are a global threat that leaders are trying to grapple with.

Another link between the two crises is that last year emissions of greenhouse gases dropped by 7%, as many countries imposed lockdowns meaning travel decreased significantly and the air became cleaner as a result.

But did COVID-19 alter the course of climate change?

In a debate, which you can watch in the player above, Euronews put that question to conservationist DR Jane Goodall, environmentalist and UN youth advisor Nathan Méténier, Copernicus climate scientist Carlo Buontempo, and World Meteorological Organization emissions expert Oksana Tarasova.

"We shall get through this COVID-19 pandemic at some point because we always do," said DR Jane Goodall DBE, who is best known for her research in the wild chimpanzees of Gombe in Tanzania.

"But when we emerge from it we're going to be right back there with a far more serious existential threat and that's climate change. Climate change it's threatening the future of all life on planet earth ... and so now, actually, it's even more important."

What difference do emissions make?

While the air may have felt cleaner in 2020, CO2 concentrations in the atmosphere reached new highs last year to levels last seen on our planet in the Pliocene period over 3 million years ago.

More worryingly, 2020 was also the warmest year on record since 2011, according to the Copernicus Climate Change Service with the Arctic circle reaching a new all-time high of 38°C, a severe hurricane season in the Atlantic, and many droughts, floods and wildfires across the world.

He explained the graph and said the red bars represent the data from Copernicus, which shows the anomaly of the global mean temperature for the 1981-2010 period.

"Since then the years have become generally warmer... if you put together all these bars decade by decade there is a clear trend going forward," he said.

The different points on the graph are similar studies carried out by other groups, but Buontempo said the "general tendencies are the same and not a fluke" and show "what is happening in the world out there."

While research shows the world continues to heat up it did see a drop in emissions of 7% in 2020.

But that makes little difference to the climate change threat, according to World Meteorological Organization emissions expert Oksana Tarasova.

"The reality is that it's not today's emissions that control climate change. What controls climate change is everything which seems pre-industrial and that forms a concentration," she said.

"Everything which we starting emitting in 1750 by burning coal and other fossil fuels just accumulates year by year because actually everything that we put out is much larger than nature."

The statistics show that during the first wave ad peak of lockdowns there was a substantial reduction in emissions in the power sector, ground transportation and aviation and shipping, which Tarasova said is related to our limitation in mobility.

"But in reality feeling dead still means we are still emitting 83% of what we emit at the maximum and that is because we did not change our consumption patterns.

She noted that energy consumption picked up and exceeded the levels of 2019.

The link between Covid and climate

But there is also a link between rising temperatures and coronavirus.

The survival and transmission of disease is reliant on certain environmental factors and may be impacted by changes in climate or weather as it alters their living environment.

But a new survey showed half of the respondents in a global poll did not understand the link between climate change and infectious diseases.

"The COVID-19 pandemic basically we brought it on ourselves," said Goodall.

"It's been predicted by those studying zoonotic diseases, diseases jumping from animals to people.

"And it's our absolute disrespect of the natural world and animals, it's created environments which make it relatively like a pathogen like a virus to jump over and create a new disease in humans like COVID-19," she said.

On his first day in office, United States President Joe Biden rejoined the Paris Climate Agreement and in Europe, a record number of Green parties have entered office.

But there needs to be more change said UN Youth advisor Nathan Métnier.

"We haven't changed the way are doing politics," he said, adding, there are still a lot of big commitments from world leaders.

"But it is still it is very very hard to understand how this is going to be achieved and I think we're getting a bit tired of those summits year after year that doesn't change anything."

He said that to achieve the Paris Climate Agreement goals of limiting global warming to 1.5°C, the EU's goal of a 55% net reduction in greenhouse gasses is not enough and should be at 65%.

A bigger issue is that last year many European countries decided on green recovery packages. But he said: "when you look at that you see only 25%, 30% that will go to the green economy."

He said it was "a big worry because if you invest so much money for green jobs or going towards more green economies and renewables but at the same time you don't have conditionality for all the other policies."

Adding that: "if all the other part of the money is going to contradict the money that has been invested in the first 30% how can you ensure that we're going to really achieve the fair and green transition the youth climate movement has been asking for now for the past two years."

But the experts do not believe it is all doom and gloom.

"For me, the real lesson learned from this pandemic actually is not so much the impact directly on climate," said Buontempo.

He said speaking as an individual: "I felt looking around me that many people reconnected to the environment to a level that didn't happen in the last probably few decades. So this lack of pollution, lack of smog, lack of traffic actually changed the attitude to the environment around us."

For Goodall, "if people all lose hope that's the end of us".

"Our intellect is what distinguishes us more than the other animals.. it's absurd that this most intellectual creature is destroying its only home so we need to get these intellects to give hope to the young people.

"If we get together and look at the picture as a whole and we all do our bit... we can indeed make a change and stop the armageddon," she said.

Dr Carlo Buontempo, Director of the Copernicus Climate Change Service. An Italian climate scientist who now works at the interface between climate science and decision-makers in government and society.

Dr Jane Goodall DBE, an ethologist and conservationist. Dr Goodall is best known for her research in the wild chimpanzees of Gombe in Tanzania. Her organisation, The Jane Goodall Institute, is active in 25 countries with programmes to benefit the community, animals and the environment.

Nathan Méténier, Member of the UN Secretary General's Youth Advisory Group on Climate Change. The 21-year-old climate and environmental activist is a leading light in the youth movement to campaign for greener policies and the protection of nature.

Dr Oksana Tarasova, Head of Atmospheric Environment Research Division at the World Meteorological Organisation. Since 2014 she has led the Global Atmosphere Watch Programme, the global network of observatories keeping an eye on greenhouse gas emissions, the ozone layer and atmospheric pollution.

To hear the latest news on the true state of our planet, watch Climate Now on Euronews every month. The series is the fruit of a unique collaboration between Euronews, Europe's biggest news channel, and the Copernicus Climate Change Service.

What's happening in the Arctic, Greenland and Antarctica?