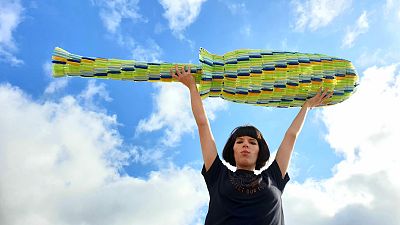 Environmental activist Ella Daish has created a giant tampon applicator as part of a protest against single-use plastic.

The piece is made out of period plastic found polluting beaches, waterways and local ecosystems in the UK. Daish sourced 1,200 applicators from 15 different locations across the country.

Of the plastic applicators collected for the project 87.5 per cent came from one brand, Tampax. The 1.8m long final piece is made entirely of the brand’s applicators to create something the company “could not ignore”.

Alongside this unmissable piece of protest art, Daish has also written an open letter to Tampax calling for them to eliminate plastic applicators entirely from their products.

The letter was supported and signed by over 40 groups, politicians and activists including members of the Green Party, Surfers Against Sewage and the Marine Conservation Society.

Together with a petition signed by over 230,000 people and the giant applicator, the letter was sent to Tampax headquarters yesterday.

Tampax has so far responded to calls to ditch plastic from customers via a series of tweets. The brand says that one of its “major goals” is to reduce its impact on the planet.

Currently, it says, it’s products are made in a zero-waste-to-landfill plant, using sustainable wind energy but the company acknowledges that “there’s more to be done”.

“I met Tampax in May 2019 and despite being the UK’s period industry giant, they have not made any changes. This isn’t good enough,” says Daish.

“They use the same excuses in their emails to me as they do on Twitter. One of Tampax’s favourite excuses is that they don’t tell people to flush their products.”

She says that she is tired of the excuses that Tampax has posted online and points to one post featuring plastic applicators in the shape of a wind turbine that left her particularly frustrated.

“Just because they use wind energy to pump out millions of single-use plastic applicators with no consideration of the negative environmental impacts, doesn’t make it sustainable.”

These pieces of plastic are often only used for a couple of seconds before being thrown away and can take centuries to break down. Most plastic applicators cannot be recycled.

The Institution of Environmental Science estimates that around 2.5m tampons are disposed of via the toilet every day in the UK. If wastewater is released into the environment, this means that plastic applicators can find their way into aquatic ecosystems.

“I have lost count of the pictures that people have sent me of applicators polluting their local area, from the Isles of Scotland to the coastlines of Cornwall, and waterways in cities like London and Southampton,” says Daish.

“Whether they enter the environment, are incinerated or sent to landfill, they are unquestionably having a huge negative impact on the planet, something must change.”