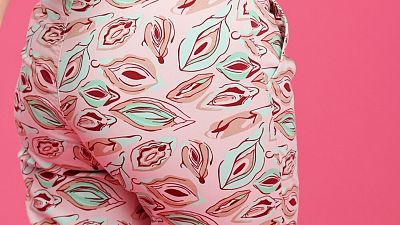 Independent ethical brand of widespread dungaree fame, Lucy & Yak, has launched a collection to get you talking about your anatomy. The capsule, made up of trousers and dungarees in bright pinks and oranges, is covered in a print made up of illustrations of vulvas.

Yes, you read that right. Designed by inclusivity and sustainability “craftivist” Sanna Suvi, the print is inspired by her dissertation work on the lack of vulva diversity in the arts and media. "There is this silly, misinformed idea that the vulva should look a certain way, where in fact they all look so different from one another but we simply aren’t educated about this diversity," she explains. The UK based designer is currently studying at Portsmouth University and has previously collaborated on work confronting the way we talk about our bodies with brands like Bodyform. "The stigma that vulvas and vaginas face is a deeply ingrained feminist issue that can only be changed if people are aware of it and talking about it."

Female Genital Mutilation (FGM) and labiaplasty, as well as other forms of gender oppression including menstrual banishment, are all encouraged by the shame surrounding talking about our anatomy. "The current style of sex education and people not learning the right terminology doesn’t serve anyone in the long run," Suvi adds, "I wanted to start conversations that happen outside sex education and the GP’s, and what a better way of doing that than covering people in vulvas!"

More than half of us have a vulva but research consistently finds that our own bodies can be a consistent source of stigma and insecurity. Over half of people between the ages of 18 and 24 have felt embarrassed about their vulva according to a survey by sanitary towel manufacturer, Bodyform but we don’t feel comfortable talking to even our closest friends. Lucy and Yak say that they hope more chatting about what we’ve got in our pants, vulva patterned or otherwise, is the first step to feeling more comfortable in our bodies.

Talk is cheap but it could save your life

Encouraging talk about our reproductive health is incredibly important and so the clothing company will be donating 5% of its sales from the Vulva collection to The Eve Appeal, a charity which raises awareness surrounding five different gynaecological cancers that frequently go undiagnosed due to stigma. “It’s perfect to be working with Lucy and Yak – what better way to challenge the taboos that surround all things gynae than by wearing a diverse range of them,” says Athena Lamnisos, CEO of the charity. She explains that 60% of people with vulvas aren’t able to correctly label an anatomical diagram with many of us incorrectly using the term vagina. "The Eve Appeal’s mantra is: know your body. If you don’t know what’s normal for you, then you can’t hope to spot when something isn’t and get yourself to a doctor in time."

It’s a problem that could be on the increase as The Eve Appeal found that young people are less educated about gynaecological cancers than the generations before them. Pet names like ‘lady garden’ might seem cute but the charity says they stop us from having frank and honest conversations about our reproductive health. The shame associated with problems surrounding reproductive health can even spread harmful misinformation about who can and can’t get these kinds of cancers.

It isn’t just your own reproductive system that could benefit from a pair of vulva print pants either. For the campaign, Lucy & Yak will be donating packs of plastic-free sanitary products to charities helping people who menstruate to tackle period poverty. One pack per pair of trousers of dungarees sold will be given to one of the two UK charities supporting people who menstruate; Freedom 4 Girls and The Homeless Period.

On average menstruation happens from age 13 to 51 for three to seven days each month which adds up to just over 6 years in a lifetime. That’s a lot of sanitary products and they don’t come cheap. One in ten young people in the UK has been unable to afford sanitary wear at some point with one in twelve having had to improvise because the cost was too much according to research by Plan International. This can lead to people who menstruate using tampons and pads for too long which can be dangerous or turning to other unsafe and unhygienic methods like socks, old rags or even newspapers.

The last five years have seen a number of groups seeking to have costs such as the “tampon tax” removed to help bring prices down. Scrapping the tax entirely is still an unusual step with The Republic of Ireland the only country to have gone completely tax-free and rates in some other european states as high as 27 percent. In the UK a recent budget announcement revealed that from 2020 all schools will provide free period products but the monthly stress of not having what you need to stay hygienic is still a problem for thousands who aren’t in school anymore. Accessing sanitary items can be particularly difficult for homeless and vulnerable people.

To provide the products whilst also sticking to their sustainability commitments, Lucy & Yak has teamed up with Hey Girls. This social enterprise was founded by Celia Hodson and her daughters after Hodson herself had struggled to afford period protection as a single mother on benefits. They offer the same biodegradable pads made from bamboo or corn fibre, organic tampons and even re-usable menstrual cups that you buy as a donation to charities like those that Lucy & Yak have chosen to support.

You can grab yourself a pair of the limited edition vulva patterned trousers or dungarees here and maybe even start a conversation of your own about breaking down the taboos surrounding reproductive health.