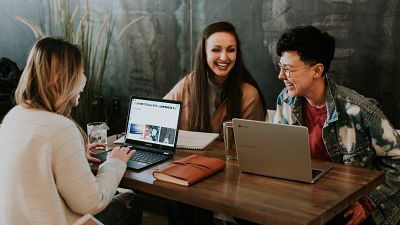 Two sustainable strategy experts, Ellie Austin and Jessica Ferrow, launched an agency aimed at helping businesses respond to the climate emergency earlier this year. When the Intergovernmental Panel on Climate Change (IPCC) report came out at the end of 2018, it warned that we had 12 years left if we wanted to limit a climate change catastrophe.

“For the last ten years people have kind of been tinkering around the edges of sustainability,” Jessica Ferrow, co-founder of Twelve, tells Euronews Living.

“When we heard [the IPCC recommendation], I think everyone who was working in any kind of sustainability or activism role - that was kind of the firecracker under the proverbial ass of everybody,” she laughs.

This urgency is the idea that drives climate impact agency Twelve, named after the number of years we have left to make unprecedented changes to every aspect of society. “We have less than twelve years, the time is ticking, we can’t just do these incremental changes anymore.”

Sisters Marcella and Melissa Wijngaarden and their friend Noor opened their eyes to the environmental and humanitarian cost of fast fashion years ago, when they met at university in Amsterdam studying physics. The trio launched Project Cece, which stands for ‘Project Conscious Clothing’.

The platform is a search engine for eco-friendly, responsible fashion, with a portfolio of fairtrade and ethical brands. Earlier this year it became the largest marketplace for ethical fashion in Europe, after it reached 100 partners.

The site is now home to over 200 brands, and boasts more than 10,000 sustainable products in one place.

“Sustainable clothing is harder to find as it’s spread out over many, typically smaller, online stores. You basically have to browse multiple websites to find what you’re looking for,” says Marcella. “This is where Project Cece comes in.”

“Reaching the milestone of a hundred partners is a huge achievement for us,” says Noor Veenhoven, co-founder of Project Cece. “It really proves that there are so many amazing sustainable businesses out there, and that buying ethically is not as hard as it seems.”

“If everyone chooses fair and sustainable clothing, then we can change this industry forever,” adds Melissa.

Capture is a new app to help individuals track, reduce and offset their CO2 emissions. The app is designed to "transform users for 'climate worriers' to 'climate warriors.'"

“There are lots of trackers available for the things that people care about – health, fitness, eating, spending. But, we saw this big gap between a lot of people caring about climate change and not knowing what to do,” explains co-founder Josie Stoker.

“That’s why we wanted to create Capture – to be able to empower individuals to track CO2 emissions just as easily as they could track their footsteps.”

The app first calculates a user’s baseline emissions and then sets a monthly target of reducing this figure by 7.6 per cent. This figure has been specifically chosen as, in order to meet the 2030 1.5 degree warming goal, we need to decrease emissions by 7.6 per cent year on year over the next decade.

Aziz and Josie started working together after meeting in Singapore just over a year ago. Three months later, in October 2019, the pair founded Capture. Josie, originally from the UK, spent nearly seven years in Asia, while Aziz worked as a software engineer in Pakistan and then in Sweden.

Josie's passion for the environment came from spending time with various Indigenous communities around the world, where she was able to witness the the true damage of the climate crisis firsthand

“I spent time in Mongolia, Kenya and Kalimantan and what I found was that all three were very heavily impacted by climate change," Josie explains. "From extreme droughts that would persist year on year to extremely unpredictable winters or an increased likelihood of forest fires, it was these sorts of extremes that really started to pique my interest in climate change. I wanted very much to be part of the solution instead of continuing to be part of the problem.”

After pairing with Aziz’s passion for software development, the two realised they had an idea which could be put to real-world use, solving the planet's biggest problem.

Iseult Ward and Aoibheann O’Brien are the founders of FoodCloud, a Dublin-based online platform and app connecting British and Irish businesses with surplus food to local charities. Food retailers on the FoodCloud system upload descriptions of surplus dry and canned goods, and registered charities then receive a notification telling them that food is available for collection.

FoodCloud also maintains storage Hubs to receive ad-hoc and regular surplus food from suppliers. The FoodCloud service and the surplus food is free for charities collecting from their local food retailer, and all food collected from the Hubs is available at operational cost. To date, the social enterprise has saved approximately 20 thousand tonnes of food, saving charities more than €61.5 million.

Andrew Almack is the founder of Plastics for Change, a social enterprise that reduces plastic pollution and poverty in developing countries by creating income opportunities for waste pickers. The India-based initiative is the first fairtrade, ethical sourcing platform to help formalise the informal recycling economy and improve the quality control process for recycled plastic.

“There is no silver bullet that will solve this grand challenge, however plastic waste can be an enabler of sustainable livelihoods,” says Almack. “Recycling and reuse creates at least nine times more jobs than sending the waste to landfills.

"With three billion people globally living without waste collection services and another 4.5 billion at the base of the economic pyramid living on $5 per day or less, there is an enormous opportunity to create positive change through inclusive recycling initiatives.”

The company is also able to boost corals' resilience against climate change, so that the corals they plant into reefs are able to withstand the warming and acidifying oceans that threaten their survival. Through ecological scale restoration projects, Coral Vita revitalises reef systems to preserve the ocean’s unique biodiversity and to help protect the communities, industries, and nations that depend on healthy reefs.

Elena Dieckmann and Ryan Robinson are the co-founders of Aeropowder, an award-winning UK startup producing plummo, a thermal packaging material made from waste feathers from the poultry industry.

The entrepreneurs created plummo as a sustainable alternative to expandable polystyrene insulation, which has a devastating impact on the environment. Using the surplus feathers, which would otherwise be converted into a low grade animal feed, Aeropowder creates a high performance insulation textile covered with compostable food-grade liners, enabling more sustainable deliveries and embracing a circular economy.

Rossi Mitova is the CEO and co-founder of Farmhopping, a Bulgaria-based online marketplace allowing farms to sell directly to consumers. The digital farmers’ market delivers meat and produce without a middle man, giving producers the opportunity to sell to buyers at a lower rate, while increasing profits, and ensuring consumers know the origins of the products on their table.

Jason Green is the co-founder and CEO of Upward Farms, an urban farm set-up growing produce and fish in aquaponic ecosystems. The Brooklyn-based company retails their leafy green salads at Whole Foods Market and other area grocers.

The company converts the waste from their sustainably farmed fish into organic manure, which is is used to grow healthy, nutrient rich soil for their plants. Jason explains, "the microbiome generated by our 'whole ecosystem' approach allows us to more than double the crop yield compared to other indoor farms while eliminating crop diseases and food-borne pathogens. We use 95% less water than conventional farms and our products are free from pesticides, antibiotics, hormones, GMOs, mercury, and PCBs."

Samir Lakhani is the founder of Eco-Soap Bank, a humanitarian non-profit working to save, sanitise, and supply recycled soap with hygiene education to the developing world.

The startup collects used soap bars from hotels and guesthouses, sanitises and remoulds them and then distributes the clean soap bars to schools, health clinics, and village communities and pairs the donation with hand washing training.

Eco-Soap Bank also makes use of other materials that hotels would normally discard, such as shampoo bottles or other packaging materials.

To date, more than 1.1 million people have received soap and hand washing training from Eco-Soap Bank. The organisation also employs 147 women in 10 countries to recycle hotel soap around the world.