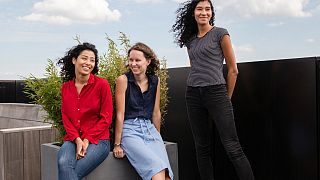 A tech start-up run by a group of physicists has just become the largest marketplace for ethical fashion in Europe.

Project Cece, which stands for ‘Project Conscious Clothing’, is a search engine for eco-friendly, responsible fashion, with a portfolio of fairtrade and ethical brands. After adding its 100th partner, the website has now become the biggest online platform for sustainable clothes in the UK and the rest of Europe.

The site is now home to over 200 brands, and boasts more than 10,000 sustainable products in one place.

“Reaching the milestone of a hundred partners is a huge achievement for us,” says Noor Veenhoven, co-founder of Project Cece. “It really proves that there are so many amazing sustainable businesses out there, and that buying ethically is not as hard as it seems.”

£140 million worth of clothing ends up in UK landfills every year.

Sisters Marcella and Melissa Wijngaarden and their friend Noor opened their eyes to the environmental and humanitarian cost of fast fashion years ago, when they met at university in Amsterdam studying physics.

“This industry relies on poor production practices with a terrible toll on the environment and subjects its workers to inhuman conditions in order to keep their prices so low,” explains Noor. “Fast fashion also encourages people to perceive their low-quality garments as disposable, resulting in £140 million worth of clothing ending up in UK landfills every year.”

The Ellen MacArthur Foundation estimates that by 2050 more than 150 million tonnes of clothing will be in landfills each year, as the average consumer throws away 60 per cent of clothes the same year they are bought.

In the past, the three friends found that finding sustainable clothes they liked wasn’t always easy.

From checking a brand’s credentials, to researching whether ethical claims are true - the Project Cece team worried that the relative ease of fast fashion meant consumers were less likely to change their shopping habits.

“Sustainable clothing is harder to find as it’s spread out over many, typically smaller, online stores. You basically have to browse multiple websites to find what you’re looking for,” says Marcella. “This is where Project Cece comes in.”

‘A couple of nerds trying to set up a fashion website’

In 2016, they combined their diverse skill sets to bring multiple small brands under one umbrella. All three women have a background in programming, so they had the technical understanding needed to make the project work.

More recently, Project Cece has expanded its team, working with new developers to improve the platform. Filters have been added on the site, so users can now refine their searches to only include vegan products, for example, or only items produced within Europe.

All three women have a background in programming, so they had the technical understanding needed to make the project work.

For physics students, a fashion platform may not seem an obvious fix - something Noor says the group found challenging in the early days. “We had a hard time being like a couple of nerds trying to set up a fashion website,” she jokes, “but I think we managed well enough!”

The focus was never about trying to appear in Vogue, Noor explains, but instead about making the world a better place through a universal experience. “We always say, ‘clothing is something we all wear,’” she says, “it's not only for the fashion designers and the fashion students and the fashionista. It's for everybody.”

The Project Cece team feel that sustainable clothing can be accessibly priced, meaning shoppers don’t have to turn to luxury fashion brands to be sure their clothes are ethical. But at the same time, consumers have to get used to the fact that a €3 t-shirt is a problem.

This sentiment is at the heart of what Project Cece is trying to do, as the trio look to make slow fashion an easy choice, while simultaneously hoping to convey the value of our clothes.

“If everyone chooses fair and sustainable clothing, then we can change this industry forever,” adds Melissa.

Leicester lockdown unveils the truth about its fast fashion industry