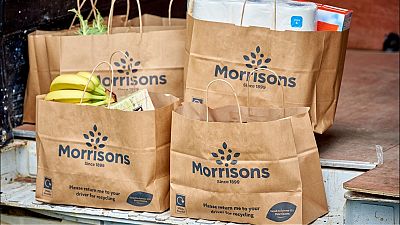 The chain is trialling the scheme in eight stores, before considering its introduction to the other 486 branches.   -   Copyright  Morrisons
By Marthe de Ferrer  •  Updated: 17/08/2020

The retailer re-introduced traditional paper bags to stores in 2018, initially for loose fruit and vegetables, as part of a scheme to prevent millions of plastic bags from being used each year.

“There’s more work to do, but this step will mean we prevent 150 million bags from being used in our stores every year.” Now the supermarket has gone one further, as it seeks to remove all its reusable plastic bags too.

Moving on from the plastic bag levy

After the introduction of the 5p bag levy, that number fell by 80 per cent.

Customers have instead switched to using reusable bags instead, which are made of a slightly thicker and more robust plastic. Although this may seem positive, the sheer quantity of reusable bags being sold is becoming a problem. It was found in 2019 that 1.5 billion were sold in 2019 in Britain - that's the equivalent of 54 bags per household.

According to the figures, instead of reusing ‘bags for life’, consumers have largely continued to view the bags as single-use, despite their more resilient design.

This is part of the motivation behind Morrisons’ complete switch to paper, which is being trialled initially in eight stores across the UK. The company says that if customers are happy, this will be rolled out to all 494 branches. The move is estimated to save at least 3,500 tonnes of plastic waste each year.

"We believe customers are ready to stop using plastic carrier bags as they want to reduce the amount of plastic they have in their lives and keep it out of the environment,” says Morrisons chief executive David Potts.

"We know that many are taking reusable bags back to store and, if they forget these, we have paper bags that are tough, convenient and a reusable alternative."

The chain claims that the paper bags can carry up to 13 bottles of wine or 16kg of shopping - the same weight as the current plastic alternatives.

Though Morrisons is the first British supermarket to return to paper bags, elsewhere in Europe that leap has already been taken. German hypermarket chain Kaufland stopped offering plastic bags last year, in favour of paper and cardboard boxes.

"In line with our holistic plastics strategy, it is only logical not to offer disposable plastic bags anymore,” explained Kaufland head of sustainability Lavinia Kochanski at the time, “that's one reason for fulfilling customers' targeted demand for alternative shopping bags and boxes.”