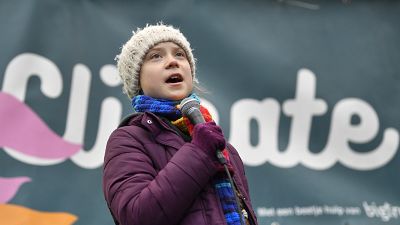 Greta Thunberg has donated €1m to projects and organisations working to end the climate crisis.

The 17-year-old was awarded the first Gulbenkian Prize for Humanity, a Portuguese human rights award, which comes with a seven-figure cheque. Thunberg announced that the prize money would be shared between different groups, with a particular emphasis on projects supporting people in the Global South.

“I am incredibly honoured and extremely grateful,” said Thunberg, “this means a lot to me and I hope that it will help me do more good in the world.

“The price money [...] is more money than I can even begin to imagine - all the prize money will be donated through my foundation to different organisations and projects who are working to help people on the frontlines affected by the climate crisis and the ecological crisis, especially in the Global South.”

She added that the money would also be shared among groups “fighting for a sustainable world and who are fighting to protect nature and the natural world.”

The first organisation to receive funding from Thunberg will be SOS Amazonia. It is a campaign led by Fridays For Future Brazil which is helping to end the COVID-19 outbreak in the Amazon, particularly among Indigenous communities.

The Stop Ecocide Foundation will also receive financial support, said Thunberg on Twitter, “to support their work to make ecocide an international crime.”

Both organisations will receive €100,000 each. Recipients of the remaining funds from the prize money have yet to be announced.

This is the biggest prize won by the Swedish teenager to date, who has been twice nominated for the Nobel Peace Prize and was named Time Magazine’s Person of the Year in 2019.

Why was Greta Thunberg awarded the prestigious prize?

The Gulbenkian Prize for Humanity is awarded annually by the Calouste Gulbenkian Foundation, a Portugal-based philanthropic initiative “dedicated to the promotion of arts, charity, science, and education.”

The foundation seeks to “recognise people, groups of people and/or organisations from all over the world whose contributions to mitigation and adaptation to climate change stand out for its novelty, innovation and impact.”

Greta Thunberg has been awarded the prize because “her tenacious struggle to alter a status quo that persists, makes her one of the most remarkable figures of our days,” explains Jorge Sampaio, chairman of the award’s grand jury, also highlighting the teenager’s “charismatic and inspiring personality.”

Why did this grandmother want to get arrested for climate activism?