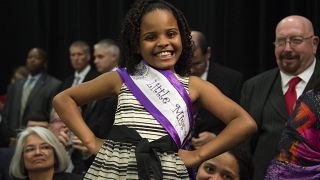 Most would say Greta Thunberg is the poster child of the climate crisis.

The 16-year-old activist’s profile has rocketed in the past year with her Fridays for Future strikes going international, followed by a two-week trip across the Atlantic in a zero-emission yacht to attend the UN General Assembly.

Her face as she saw U.S. President Donald Trump for the first time spawned a thousand memes. Since her memorable UN speech, Greta has been inspiring children and adults around the globe to live more sustainably with her honest, un-sugar coated speeches.

She has even done a voiceover for a song by The 1975. It's safe to say, the Swedish school girl is trending.

But Greta's not the only one skipping school to take a stand against the climate crisis.

With climate activism on the rise in under 25s, here's a list of 7 young climate activists to inspire you. It only reminds us that, no matter your age, you can always make a difference.

7 young climate activists we should be talking about

11-year-old Mari Copeny, or “Little Miss Flint”, is not new to the activism game. At the age of 8, she met the then-US President Barack Obama after writing him a letter about the water shortages in her hometown of Flint, Michigan. Mari was already organising water drives and raising awareness about Flint’s water crisis when she sent her letter. Not only did Obama reply but he invited her to meet him in person.

Mari wants to run for office in 2044 as her Instagram bio suggests. "Future President. Cheerleader. Role Model," Mari is definitely one to watch.

For 17-year-old Xiye, activism runs in the family as her parents started their relationship at a climate change conference in 1992. Citing Greta as her inspiration, she is now one of the lead organisers of the Fridays for Future Youth Climate Strikes in New York City, and helped in the organisation of two Global Climate Strikes in September of this year.

Xiye grew up in Mexico and saw the impacts of climate change first hand, telling the Huffington Post, “that was the first time where I encountered not only the effects of that kind of crisis, not only in times of extreme weather patterns, but also the contamination of pollution that comes from this whole system of depending on the petroleum industry.”

Read more | 'The oceans are rising and so are we': Global Climate Strike London

Autumn is an activist for clean water and indigenous communities. In September of this year, she gave a speech at the UN General Assembly, during which she said, ‘I’ve said it once, and I’ll say it again we can’t eat money or drink oil’. She has been nominated for the 2019 International Children’s Peace Prize, and continues her activism work.

Xiuhtezcatl Martinez is the Youth Director of Earth Guardians, a collective of artists and activists who want to unite in the face of the climate crisis. Having just turned 18, Xiuhtezcatl is an indigenous climate activist and hip-hop artist, and began speaking around the world at the age of 6.

Lesein Mutunkei is a 15-year-old from Kenya who has made his love of football into an incentive for environmental action. For every goal he scores, he plants a tree. His dedication to reforestation was triggered after learning about the shocking impacts of pollution and deforestation at school. Lesein has encouraged his school and football club to be more sustainable, and he hope to expand his #Trees4Goals campaign across Africa.

Sisters Ella, 10, and Caitlin, 8, told the BBC they were “mind-blown” after their petition on Change.org pushed fast-food chain Burger King to stop giving away plastic toys will children’s meals. The siblings decided to start the petition after learning what a serious harm plastic waste does to wildlife. "We like to go to eat at Burger King and McDonald’s, but children only play with the plastic toys they give us for a few minutes before they get thrown away and harm animals and pollute the sea," they write on the web page for their petition.

The successful campaign got over half a million signatures, and also led McDonald's to swap their Happy Meal toys for fruit bags.

Leah is a 15-year-old Ugandan climate activist who is pushing her government to take action against the climate crisis by launching the campaign #BanPlasticUG to tackle the issue of plastic pollution. She was first made aware of the impact of climate change when watching local news about prolonged drought and landslides in Uganda.

For her 15th Birthday, Leah planted 200 trees, and is now an ambassador for Fridays for Future. After taking inspiration from Greta, she has been on strike every Friday since February 2019 to help encourage other young people and adults alike to take the issue seriously.