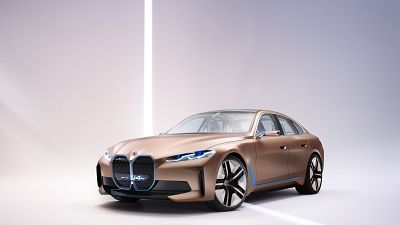 Hans Zimmer is the man behind the music. Having written film scores for hits like The Lion King and Interstellar, the German composer is now working on a series of mini-soundtracks to feature in the 2021 all-electric BMW i4. The electric car is anticipated to be the first genuine rival to Tesla’s Model 3. Zimmer’s soundtracks will not only be exclusive to this model, they will set the tone (quite literally) for the sound of all future electric BMWs.

What do electric vehicles (EVs) sound like? At low speeds, EVs and hybrids can be near-silent. This has led experts to believe that, compared to their gas-guzzling counterparts, they are 37% and 57% more likely to cause low-speed accidents involving pedestrians and cyclists, says a 2011 study by the US National Highway Traffic Safety and Administration.

As a result, currently new models, and by July 2021 all new electric cars, must now be fitted with Acoustic Vehicle Alerting Systems (AVAS) in the EU. These systems emit a continuous noise when moving 20 kilometres per hour or slower or when reversing, helping to alert pedestrians.

So, what should fill the silence?

Well, safety is the primary purpose, “but there is still room to inject the brand personality and differentiate it from others in the competitive space,” says sound designer Connor Moore, who has worked on the audio branding for Tesla and Google/Waymo cars. While early approaches to AVAS sounds opted for either emulating Internal Combustion Engines (ICE) or a plain and simple electric motor noise, we are now starting to see more creative approaches. “We have an opportunity to take an atonal ICE tone and craft something [] to create a very specific emotion - which is powerful,” says Connor.

When it comes to an engine-emulating AVAS system, there are pros and cons. Kota Kobayashi, design lead at EV manufacturer Arrival, tells Euronews Living, “people already recognise the sound, so there is no need to educate the meaning of the sound. But if we were to communicate various levels of risk to pedestrians, it may be difficult to do so by the sound of the combustion engine alone.”

Should EV manufacturers start thinking outside the box?

BMW is certainly breaking away from legislation-imposed sounds, with Zimmer and collaborator Renzo Vitale composing what the manufacturer refer to as “sound worlds”. These will apply to the exterior, the AVAS, as well as the opening of car doors, and a special start/stop musical theme will apply to the concept version of the i4. Maybe we can even expect an Interstellar-esque docking theme to sound out as you connect the electric BMW to a charging station? Connor says “simplicity” is key when composing these sounds.

“We don’t want to be heavy-handed or overly rich or complex for a turn signal or seatbelt chime. To me, good sound design is almost transparent. It should be something you notice and love, but should live more in the subconscious.”

One might assume that it would be cutting-edge EV brand Tesla choosing to go leftfield and employing the skills of a film composer, rather than BMW, the German car manufacturer steeped in history. While the Tesla Model 3s were fitted with an AVAS system in the US from September 2019, it is one of the only EV manufacturers that is yet to experiment sonically.

The Japanese government introduced guidelines for EV and hybrid pedestrian warning systems in 2010, leading to the 2011 Nissan LEAF featuring one of the earliest versions of an AVAS system. Audi’s first 100% electric car, the e-tron, also features a similar spaceship-like sound to BMW’s Concept i4 when moving from a standstill. It’s a musical chord made from synthesiser sounds that increases or decreases in pitch in correlation to the car’s speed.

Perhaps Tesla’s quietness on the subject of AVAS is because it often relies on tweets from CEO Elon Musk to promote upcoming features of its cars, instead of carefully choreographed press releases. Although, he did once tweet about having a ringtone-like AVAS and horn system for Tesla drivers with sounds ranging from coconuts clacking together (a Monty Python reference) to goats bleating. This would be fun, maybe even funny, but far from a safe AVAS system, and the idea is a non-starter in Europe anyway as EU legislation is even stricter than the US equivalent.

An interesting insight into Musk’s musical taste was revealed recently, when he talked about a YouTube restream of a Disclosure set, the electronic music duo who brought Sam Smith into the limelight with the song “Latch”. Musk referenced the duo as his inspiration to compose over 100 deep house tracks. Would Daft Punk, the enigmatic, robot-helmet wearing, musical pair behind hits like “Get Lucky”, suit Tesla’s aesthetic too? They would certainly have looked the part, climbing out of the futuristic Cybertruck at its cyberpunk-themed unveiling last year.

The rising popularity of electric vehicles certainly looks set to continue. At the beginning of 2014 only around 500 EVs were registered per month in the UK, whereas this year the monthly average was over 10,600. The Tesla Model 3 broke the record for electric car registrations in a single month in Europe with 22,137 in December 2019.

So, it’s no overstatement to say that the collection of noises EV manufacturers come up with could well shape the sound of future cities. The AVAS systems will be most active at low-speeds amongst electric cars, buses, taxis and the countless hybrid Toyota Prius’ driven by Uber drivers.

Do AVAS systems taint the possibilities of a quieter city of the future?

Every year 1.6 million ‘healthy life’ years are lost in European cities due to environmental noise, primarily traffic, states the World Health Organisation. Increased risk of heart disease, stress-related mental health issues, tinnitus and cognitive impairment among children are some of the main health risks. An adaptive AVAS system could be used to emit noise at a quieter level when in a suburban area at night time, where the sound level is often 40dB or lower.

What’s more, researchers at the Danish Road Directorate found EVs to be 4-5dB less noisy at low speeds than the equivalent petrol-powered car, proving a switch to electric would still have a significant impact in reducing noise pollution.

“We have an opportunity here to potentially design a quieter world,” says Connor.

At this rate, cities of the future could end up sounding like the sci-fi clamours from Blade Runner 2049, but will other manufacturers choose to follow in BMW and Audi’s creative footsteps?