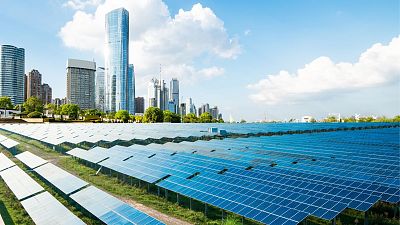 Double sided solar panels which collect light on both sides and move to follow the sun’s position produce over a third more energy than standard systems.

Most solar panels installed around the world are fixed in one position, without the ability to adapt to where the sun is in the sky. Therefore, research has previously been focused on how to make these systems more efficient instead of looking at how the electricity produced could be increased in other ways.

Scientists at the Solar Energy Research Institute of Singapore (SERIS) have been looking at solar panels which are able to turn sunlight into energy on both sides. The side of the panels not aimed towards the sun can also use light being reflected on the ground to create electricity.

They also looked at another technology which uses global weather information from NASA to tilt the panels so they are in the best position to get the most sun throughout the day.

By combining data from double-sided panels and sun tracking technology, Carlos Rodríguez-Gallegos and his team at SERIS found that energy production could be increased by 35 per cent. In addition to gains in the power produced, it could also decrease the cost of electricity by an average of 16 per cent.

“More and more evidence points toward bifacial and tracking technology to be reliable, and we see more and more of it adopted in the field,” says Rodríguez-Gallegos in the study published in Joule. “Still, transitions take time, and time will have to show whether the advantages we see are attractive enough for installers to make the switch.”

What happens to the old solar panels?

Swapping the millions of existing systems already installed to this more cost effective alternative could have unintended consequences for the environment. After solar panels are disposed of they release hazardous chemicals and there aren’t many valuable parts to salvage which would encourage recycling.

The Electric Power Research Institute noted in 2016 that long-term storage of old solar panels was probably the best option for dealing with this waste right now, until efficient recycling technologies became available.

Solar panels usually have a 25-year plus lifespan which means that the problems of how to dispose of them haven’t yet become bad enough to be widely addressed. A report by SolarPower Europe, a group of organisations looking to ensure solar energy is widely adopted throughout Europe, says that sustainability should be one of the “key pillars” of any clean energy strategy adopted by the EU.

According to Raffeale Rossi of SolarPower Europe, various options for policies to help with solar panel waste are being looked at by the EU. It is key, he says, that these include a push for “closing the production loop” in a way that supports the European Circular Economy Action Plan that is currently being implemented.