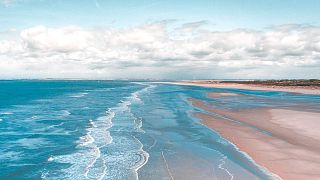 Experimental trials of a new technology that will brighten clouds have been carried out by a team of scientists in Australia. “Cloud brightening” deflects heat away from coral reefs stressed by global warming. This could provide an interim solution to help save important marine environments from the damaging effects of climate change.

The Great Barrier Reef is currently experiencing its third mass bleaching event in five years. When sea temperatures rise above seasonal averages, corals become stressed and expel the algae that give them their vibrant colour. This causes the coral to turn white in what is referred to as bleaching.

An unusually hot summer saw the highest sea surface temperatures ever recorded on the Great Barrier Reef. Scientists at James Cook University in Townsville, Australia performed an aerial survey of 1,036 reefs and found that these extreme temperatures have led to the most widespread bleaching they have ever seen.

“For the first time, severe bleaching has struck all three regions of the Great Barrier Reef – the northern, central and now large parts of the southern sectors,” said Professor Terry Hughes, Director of the ARC Centre of Excellence for Coral Reef Studies.

Bleaching isn’t always fatal to corals but the more that are affected by the phenomenon the more likely they are to die. With summers growing hotter and hotter every year, it gives this unique ecosystem very little chance to recover. The UN Intergovernmental Panel on Climate Change predicts that 70 to 90 per cent of coral reefs could be lost if global warming reaches 1.5 degrees Celsius.

A technique called “cloud brightening” is being developed to try and deflect some of the sun’s rays away from the overheated reef. Researchers from the Sydney Institute of Marine Science Centre and Southern Cross University trialled the experimental technology off the coast of Queensland, Australia in late March.

Using two high-pressure turbines, the team sprayed microscopic droplets of saltwater into the air. These then evaporate leaving behind very small salt crystals, which water vapour clings to, creating clouds that reflect the sun more effectively.

"We tested the hypothesis at one-tenth of the scale we’re aiming for, using a drone in the atmosphere and a sampling vessel 5km away on the sea surface," says project leader Dr Daniel Harrison. “[It] showed how we can successfully create hundreds of trillion of these sea salt crystals per second which float up into the atmosphere to bolster the reflectivity of the existing clouds,”

He explains that by using these reflective clouds to shade the reef, it could be possible to reduce the severity of bleaching during heat waves. “Cloud brightening could potentially protect the entire Great Barrier Reef from coral bleaching in a relatively cost-effective way, buying precious time for longer-term climate change mitigation to lower the stress on this irreplaceable ecosystem.”

This is just one of 43 concepts the Australian government is backing in an attempt to save the Great Barrier Reef. The Reef Restoration and Adaptation Program brings together experts from across Australia and recognises that simply reducing carbon emissions is no longer enough. Over the next five to 10 years, research projects being trialled will include breeding more heat-tolerant corals, enhancing the structure of damaged reefs using 3D printed forms, and floating ocean pools to help more coral larvae to survive.

It is hoped that together these futuristic concepts will save the reef from the oncoming threat of increasing ocean temperatures. With the danger of our coral reefs disappearing completely, scientists say it is a race against time to find solutions that work before the effects of global warming only worsen.