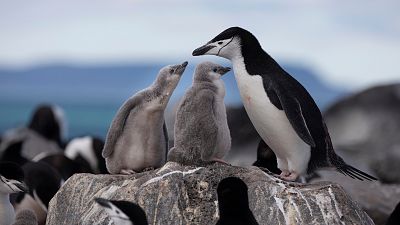 Adorable chinstrap penguins are under threat from a changing climate, Greenpeace has warned.

Some colonies in the Antarctic have lost as much as 77% of their population since they were last surveyed almost 50 years ago.

In 1971, scientists on an expedition to Elephant Island on the northeast of the Antarctic Peninsula found 122,550 breeding pairs of chinstrap penguins. Now, there are just 52,786 pairs – a fall of 56%.

Researchers from Stony Brook and Northeastern universities have been recording the behaviours of the little known chinstrap penguins, using drone surveillance and by getting up close and personal with the animals.

Much of their work took place on Low Island, an important breeding ground for the species.

“Such significant declines in penguin numbers suggest that the Southern Ocean’s ecosystem has fundamentally changed in the last 50 years, and that the impacts of this are rippling up the food web to species like chinstrap penguins,” said Dr Heather Lynch, associate professor of ecology and evolution at Stony Brook University.

“While several factors may have a role to play, all the evidence we have points to climate change as being responsible for the changes we are seeing.”

The news comes as new record temperatures were recorded in the Antarctic, hitting an as yet unverified high of 18.3C on 6 Feb. The previous highest recorded temperature was 17.5C on 24 March 2015.

In response, Greenpeace campaigners the world over have set about installing penguin ice sculptures in a bid to raise awareness that the chinstrap penguin, like its ice statue equivalent is in danger of disappearing in the warming world.

“This new research shows how the climate emergency is decimating their numbers and having far-reaching impacts on wildlife in the most remote corners of Earth,” added Greenpeace oceans campaigner Louisa Casson.

“2020 is a critical year for our oceans. Governments must respond to the science and agree a strong Global Ocean Treaty at the United Nations this spring, that can create a network of ocean sanctuaries to protect marine life and help these creatures adapt to our rapidly changing climate.”

Blessed by Tibetan monks, this turtle had a very festive return to sea

London's new nature reserve has as much biodiversity as a rainforest