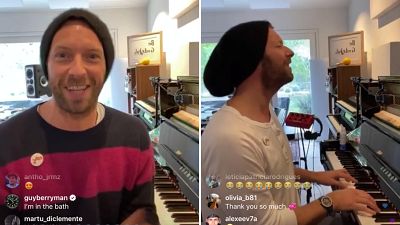 Coldplay’s very own Chris Martin has come up with a tech-savvy solution to provide fans with live music from his house during this period of self-isolation.

Taking to Instagram on Tuesday 17th March, Chris Martin set up a half hour live stream featuring himself at home in the studio. “So, I’m on my own in my house and I was supposed to be with the band Coldplay, but we are stuck in different countries so we can’t play together,” he said to 11.1 million followers.

“I thought it would be nice to see what you’re doing and how you are and what I can do for you. I had an idea we could call this thing ‘Together at Home’. So I’m here at your service for the next twenty-something minutes,” he told viewers. The livestream, described as a “solidarity session” was in partnership with the World Health Organisation (WHO) and Global Citizen.

Songs he played included A Sky Full of Stars on acoustic guitar and, on the piano, the popular classic Clocks from Coldplay’s second studio album in 2002.

Talking modestly about his first time nerves using the Instagram live platform, Martin appeared happy to be reaching people far and wide with his home-made concert set-up. Reading comments from fans in Uruguay all the way to Panama, he spoke about how the coronavirus was affecting him and his family.

“Let me tell you how it is here, it’s strange. No one’s really going anywhere, my kids seem ok. I feel like the right thing to be doing is staying quiet, staying at home and not buying too much toilet paper.”

Coldplay was one of the first bands to announce it would cancel a global tour in 2020, due to environmental concerns. The band stated in a BBC interview that the “hardest thing is the flying side of things,” but that it hoped to put on solar powered shows and use no single use plastic.

While the Coldplay frontman was the first to start the Instagram trend at home, other artists soon joined in. John Legend posted his own Instagram live with the hashtag #togetherathome just hours after Martin’s went live. Sitting at his piano with his wife Chrissy Teigen, Legend gave fans a similarly intimate concert, accepting requests along the way.

“As promised, I am pants-less, I have a robe on. But I do have underwear on, in case your curious. So what songs do you want to hear?” he said, before launching into a rendition of Stevie Wonder’s Love’s In Need Of Love Today.

Legend’s advice for those concerned about coronavirus is, “we’ve got to love each other, care and take care of each other.”

“Realise you are part of a community and make decisions that may not benefit you directly. One of those things is for young people to stay home and distance”, he told fans. It’s about “being considerate of people who are vulnerable.”

Gary Barlow took a similar approach, choosing to showcase some new song material in what he is calling ‘The Crooner Sessions’ (a pun on corona). He joked, “no fear, none of the duets were performed together. There was no touching of any kind involved.”

Will Instagram live ever replace the thrill of a gig?

It is unlikely watching performances on Instagram will ever beat live music in the flesh. But given the current circumstances in which we are encouraged to stay indoors, it is an engaging alternative that reduces the need for us to travel. In the UK, an estimated 33 per cent of carbon dioxide (CO2) emissions comes from the transport sector, making it larger than both energy and business which account for 27 percent and 18 per cent respectively.

Music events startup Sofar Sounds, which originated in London, has had to cancel all live gigs for the foreseeable future, for the safety of their audiences and artists. “We know how important live performance is to those artists and to supporters like you. That’s what makes this difficult. Though we’re putting shows on hold, we are working on other ways to support local musicians during this time,” said CEO Jim Lucchese in a statement.

In the world of classical music, The New York Metropolitan Opera is offering online streaming of past performances after it was forced to shut. American mezzo-soprano Joyce DiDonato and Polish tenor Piotr Beczala live-streamed a 90-minute performance of Massenet’s Werther from their living room.