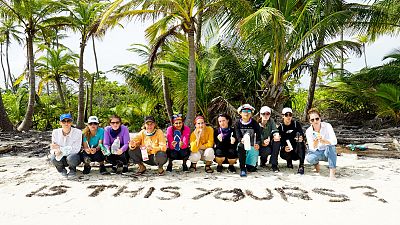 Some 8.3 billion tonnes of plastic has been produced since the 1950s, says Greenpeace.

An estimated 8 million tonnes of plastic waste enter the world’s oceans each year, says the UN. Of that, almost 30,000 tonnes of microplastics end up contaminating nature, according to the ECHA.

With so many data sources, it's far from easy to understand the impact of all this plastic waste on everyday life. Women from different corners of the world came together to take part in a mission and find some of the missing answers.

The eXXpedition Round the World science programme is a two-year scientific research mission that set sail from the UK in October 2019, as euronews Living reported earlier.

The 730-day voyage will complete 30 legs and will eventually see 300 female crew members join the effort to discover the real effects of plastic pollution and pinpoint solutions. Currently in its sixth leg and having just finished a journey through the Panama Canal, the crew is spending a week around the Galápagos Islands in the Pacific Ocean.

On the International Day of Women & Girls in Science, while the crew carried out their mission on the Galápagos Islands, euronews Living caught up with Mission Director & Co-Founder eXXpedition Emily Penn.

What are your expectations of the next leg?

We are sailing between two extraordinary places. From the wildlife-rich Galapagos to the remote shores of Easter Island. And along the way through the South Pacific gyre - the least explored accumulation zone in the world - to do cutting edge scientific research to understand what plastic is there and therefore how to prevent it. I also hope that the crew have a life-changing experience that propels them into action; making them effective change makers back on land.

You involve 300 women from around the world, what is their role and what can they do beyond the trip?

Each eXXpedition voyage provides an experience, platform and learning opportunity for our amazing multidisciplinary crew. While onboard, alongside the scientific research, each member of the crew shares their own experiences, participates in workshops to find where they fit in creating solutions and explores collaboration opportunities with other members of the team. After completing their voyage, each guest crew joins our already thriving network of eXXpedition ambassadors, taking the message of ocean plastic and achievable actions back to their own communities.

What kind of women are interested in these missions, and how are they taking part?

We are looking for multidisciplinary crew with an interest in the plastics issue, but that’s as specific as it gets. We want a whole range of women, different ages, different backgrounds and different skill sets. Previous crew members have been businesswomen, product designers, entrepreneurs, scientists, artists, teachers, actresses, sustainability professionals and more. You do not need any sailing experience: we have professional crew on board who are there to give guidance and to make sure that everyone is safe.

How does a day onboard tend to pan out?

Crew members are split into watch teams and take turns to take part in all the required on-board activities, including sailing, cooking, science, cleaning, producing content to share your story and much more. At night we work in watch teams to keep the vessel on course while others are sleeping. The days are filled with activities from dawn until dusk, there definitely isn’t a dull moment!

Are you any closer to mapping how marine plastics end up where they do?

What we don’t know is how many times that has sunk to the depths in a place so deep we can’t even measure. In 2018, I was the Mission Leader for eXXpedition North Pacific which was a voyage to sail through the North Pacific gyre and I saw more plastic in the ocean than I ever had in the last 10 years – it was terrifying. The positive news is that attitudes are starting to change and if we can take away the pressures of pollution, the ocean will bounce back. For this to happen, we have to turn off the tap, which is why I now spend more time working with individuals and industry-focused on how we can create solutions on land which is where change needs to happen.

The current mission is led by the researcher of the University Plymouth Dr Winnie Courtene-Jones, who told Living that after having sailed across the Atlantic Ocean, crossing the North Atlantic gyres, they found a relatively high abundance of microplastics. "These regions are known to accumulate plastics, however, what was unexpected was that the density of microplastics was similar here, in the gyre, and when we left the UK last October," says Courtene-Jones.

Most of the plastics they have been finding in surface waters are composed of high-density polyethylene, "typically the plastic used in ridged plastic packaging", she adds. "We’ve also been finding polyester fibres in our subsurface water samples, which is examining how microplastics may move through the water column."

Watch the video above to learn more about the first few months of this mission.

Breakthrough means plastic can be recycled hundreds of times