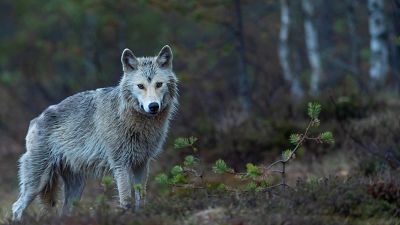 Wolf populations are on the rise in Germany where the animals had previously been at risk of extinction.

Populations plummeted after centuries bearing the brunt of farmers’ anger for attacking livestock, while industrialisation and the development of infrastructure such as roads encroaching on their forest homes further diminished their chances of survival.

But in eastern regions of Germany, some wolf packs started making reappearances as they crossed over the border with Poland. The reason is the demilitarisation of the region, with abandoned military bases becoming a crucial factor in the wolves regaining their habitat.

“What is remarkable is that the military areas acted as a stepping stone for the recolonization — and were far more critical than civilian protected areas in the early stages of recovery,” said Guillaume Chapron, a wildlife ecologist at Swedish University of Agricultural Sciences in Uppsala.

The latest data suggest the country has 73 packs and 30 pairs of wolves. “Twenty years ago, no one would have expected this,” Ilka Reinhardt adds. He’s a biologist with Lupus, the German Institute for Wolf Monitoring and Research in Spreewitz. He thinks Germany’s fragmented habitat and the prevalence of roads and humans “shows how adaptable wolves are”.

What makes military bases special is that humans can’t access them while animals can. The difference seems to be poaching. Military training grounds aren’t fenced, making them open to animals but they are closed to the public and patrolled by federal agencies meaning poachers and hunters can’t get in.

In the last year alone, wolf populations have soared by as much as 36%, meaning poachers are even less of a threat now as they would likely be able to sustain their numbers.