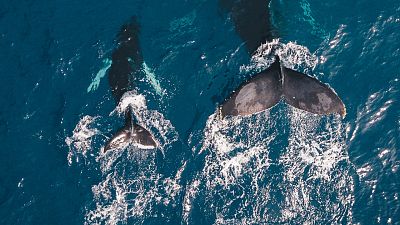 Scientists at the International Monetary Fund (IMF) have calculated the value of a whale at $2 million each due to the important role they have in reducing the amount of CO2 in our atmosphere.

Whales have been being hunted for hundreds of years with numbers reaching an all time low in the 1930s when over 50000 were killed each year. While conservation efforts and bans on whaling have helped, the gentle sea giants still face dangers such as ship strikes, fishing nets and the overall increase in ocean temperatures.

Blue whales could save us from the climate crisis

Whale biologists think that only a fourth of the planet's population remains with blue whales at as little as 3% of their previous numbers.

Restoring these incredible sea mammals to their pre-whaling numbers could prove vital to reversing climate change. The animals accumulate carbon in their bodies throughout their life and then sink to the bottom of the ocean sequestering huge amounts of CO2. A great whale, for example, can take nearly 30000 kg of CO2 out of the atmosphere for centuries compared to the around 15 kg captured by a tree each year.

"The ocean is really the greatest carbon sink on planet earth," explains Michael Fishbach, Executive Director of the **Great Whale Conservancy  **in a podcast on the subject, "it's the most effective and greatest puller of carbon out of the atmosphere greatly assisting us in our fight against climate change."

Beyond the saving the whale

It's not just what they store in their bodies, however. The waste they produce is brought to the surface by their vertical movement and feeds organisms called phytoplankton in a unique system that no other animal can reproduce. Fishbach describes these tiny life forms as the "greatest photosynthesis method on planet earth far surpassing all of the photosynthesis that's done by all of the vegetation on land".

Generating 50% of all oxygen and capturing 40% of CO2 produced, these vital organisms rely on whales to provide nutrients and maintain their numbers. If the number of whales was restored to around 5 million this would significantly increase phytoplankton numbers.

Even a 1% increase in phytoplankton would capture millions of tonnes of additional CO say the IMF. Whale conservation, then, could prove a vital tool in battling our increasing carbon emissions. The articles authors hope that if the value of a whale is better known, more can be done to stop them from being needlessly killed.

You can read more about how whales are helping to fight climate change in the IMF's report "Nature's Solution to Climate Change" and listen the podcast on the subject here.