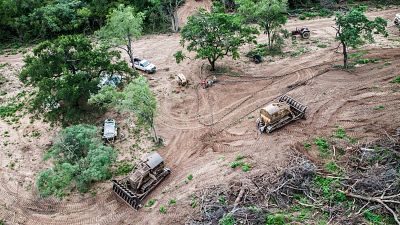 Ditching red meat in favour of chicken might not be the green move many believe, Greenpeace has warned. In fact, by increasing demand for poultry, unwitting consumers might actually be intensifying destruction of South American forests.

In a new report, the environment charity issued dire warnings that the Amazon, Gran Chaco and Cerrado forests have borne the brunt of well-intentioned shoppers' decisions to swap red meat for chicken and poultry.

The UK alone imports more than three million tonnes of soya each year from Argentina, Paraguay and Brazil. The majority of this is used to feed factory-farmed chickens. Meeting the requirement for that three million tonnes requires in the region of 1.4 million hectares of land to grow it on - an area bigger than the country of Montenegro.

In its path, the soya-growing industry has left wildlife-rich savannah in South America destroyed, displacing wildlife.

Though many vegetarian and vegan alternatives to meat contain soya as their primary form of protein, that pales in comparison to the 90% of soybeans produced globally that go into animal feed for the meat and dairy industries.

In fact European supermarket giant Tesco told Greenpeace 99% of its soya footprint is made up of animal feed. It is responsible for more than 500,000 tonnes of soya imports into the UK each year, making up more than a sixth of the total.

With chicken rising in popularity, while other meats lag behind, the rising demand has led to a hastening in deforestation for soya growing regions in South America. Soya production has more than doubled since 1997, contributing to the 80% of deforestation around the world that is making way for agricultural production.

It comes in spite of efforts by supermarkets, meat processors and catering professionals to put a stop to the practice. Ruth Kimmelshue, chief sustainability officer at meat processing giant Cargill said: "Despite our collective efforts, our industry will fall short of a 2020 goal to eliminate deforestation."

Meanwhile, none of the restaurants, processors or grocers surveyed by Greenpeace could guarantee the soya they used for meat production came from a deforestation-free source.

"But supermarkets and fast food restaurants are keeping them in the dark when it comes to the precious forests being destroyed to feed most of the chicken they sell. What’s worse, instead of tackling the problem, they’re adding to it by pushing customers to buy more.

"Animal feed for meat production is Europe’s largest contribution to deforestation. Soya imports represent 47% of Europe’s deforestation footprint, compared to 14% for pasture expansion for livestock and 10% for palm oil."