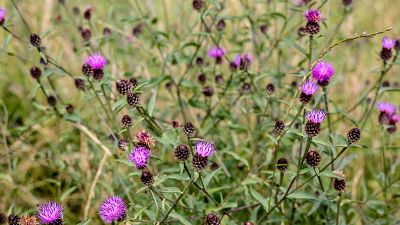 With a picnic packed safely in my bag, away from the enquiring noses of the many dogs I met along the route, I set off across Farthing Downs and Happy Valley to explore the South London Downs with the promise of a pub at the end of my 4 km walk. Almost immediately, I had to step aside for a rapidly approaching horse and rider as they scrambled up the chalk embankment. Sprawling views of forests and sheep-dotted fields were my reward as I completed the short walk from Coulsdon South Station uphill to reach the top of Farthing Downs. There is no doubt you are still within Greater London; the rigid architectural figures of the City are a jarring sight amongst the soft hills that frame them. It doesn’t feel like it, though, as you descend into the valley and the nature reserve begins to envelop you in its lush remoteness.

Whilst in the process of planning my walk I had discovered that this collection of parks is made up of multiple Sites of Special Scientific Interest (SSSIs), extremely rare chalk grasslands that can be as diverse in species as a rainforest. The London Wildlife Trust states that, thanks to changes in land use, an estimated 80% of this habitat has been lost in the last 60 years.

On the hottest day of 2019 so far and just a week before my visit, a special ceremony welcomed this collection of green spaces into London’s collection of NNRs. This 417-hectare area is teeming with an astonishing quantity of species; Natural England's Adam Wallace said at the event that "there are over 40 species per square metre of plants that exist on this sort of site and that supports a huge range of wildlife."

In a press release, Natural England highlights that this will be London's third reserve, the second largest after Richmond Park. Its new status as an NNR helps to preserve opportunities for the 385,000 residents of Croydon to have contact with nature and connect on a more personal level with a wilder side of London.

It’s not only the residents of Croydon, however, that will benefit from the protection of this outdoor space. Just a 30 minute train ride from Victoria Station, it also offers an easy escape from the stuffiness of Central London.

I sat down to enjoy my picnic on a bench surrounded by this rare grassland, overlooking Happy Valley. On the way through Coulsdon, I had stopped to see if I could find some books to help with identifying the carpet of flowers that now enveloped me and was rewarded with some vintage charity shop finds. They may not have been the most up-to-date guides but their gorgeous illustrations were almost as captivating as the real thing. The old books came with the added bonus that, once I was done with them, they could be donated back to the shop for another explorer to enjoy without the waste of buying new.

Even in the middle of a weekday afternoon, I found people enjoying the reserve at every point in my walk. As I was taking photographs, one man passed comment to a couple sat with him, “aren’t you going to take any tourist pictures?” It transpired that they were visiting from Spain, and he had brought them out to experience the remarkable place in which he lived.

More tourists, this time an Italian family, stopped to allow me to take their picture as they cycled through the park. On the grass a little way ahead lay a children’s activity book with the scribblings of an eager insect enthusiast covering the page, its owner deeply engrossed in the identification of an uncooperative butterfly several metres away. Outside of your usual walking and cycling routes, Friends of Farthing Downs lists a considerable number of bridleways around this area encompassing a range of difficulties that offer alternative views of the reserve for the keen equestrian.

It is this kind of engagement with the environment that Croydon Council, the City of London Corporation and Natural England hope will encourage the local population, and those from further afield, to help keep this vital natural resource intact. Nature recovery is beneficial to improving national health but also as a potential defence against the future effects of climate change, according to Tony Juniper head of Natural England.

Cresting another hill, the encroaching housing estates signalled that I was nearing the end of my walk. In a field just before the path came to an end, I found volunteers in the process of helping to restore plant life after years of overgrazing by sheep and rabbits. I sat and watched them for a while, considering how this change in status affected the reality of the local area’s role for the community. Turning the South London Downs into an NNR doesn’t necessarily change an awful lot about experiences of the area; it doesn't add any flashy visitor centres or adventure playgrounds. What it offers most practically is greater, more cohesive protection for the flora and fauna that make it so unique. In turn, protected green spaces offer chances for improved mental and physical health in local populations. But what else?

Inclusion of another locally important green space into the group of 224 NNRs that exist across the UK really seemed important as I watched the volunteers. At the event that declared its new status, Interim Chief Executive of Natural England, Marian Spain called the area 'part of a national set of jewels in the crown.'

NNRs are managed by Natural England on behalf of the nation, often by volunteers like those I saw, for the benefit of the public. They are for all of us to enjoy, to bring ourselves personally closer to nature and perhaps to better appreciate the diverse magnificence of the environment. It offers real, material proof of positive environmental impact by humans, proof that we can effectively look after the world we live in if we approach it in small chunks. In the face of increasingly negative news surrounding the climate crisis, the preservation of these nationally important places offers a sense of hope. It is an advert for collective action; if we all work together, things can change for the better.

With a happy glow that only a few hours spent outside can bring, I rounded the final corner to the end of my adventure, The Fox, an 18th century village pub very much at home in the picturesque rural surroundings that had so absorbed me for the last 4 km. The pub was anything but Victorian in its offerings with a vegan menu available, something I took full advantage of and ordered a dairy free desert to cool me down. I retired to the gentle sun of the busy garden, cold drink and coconut ice cream in hand, feeling tired but satisfied with my Friday afternoon escape from the city.