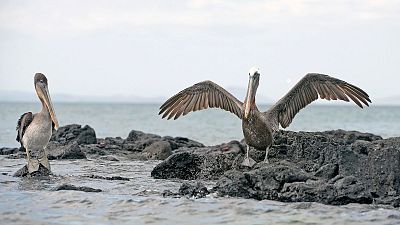 A Louisiana island that provides a crucial nesting ground for pelicans and other seabirds is being restored to nearly its former size after decades of coastal erosion and a devastating offshore oil spill 10 years ago.

“The small isles, small parcels are very subject to rapid deterioration in that kind of environment,” says Baker, “And the BP oil spill also covered this island so it smothered a lot of vegetation, which expedited the amount of wetland loss we had out here.”

The island had shrunk from 18 hectares to just 6 in 2010 when the Deepwater Horizon spill saw thousands of tonnes of oily material deposited on Louisana’s shorelines. Eventually, only around 2 hectares remained that was high enough above the water level to allow the pelicans to build their nests.

To restore the island, $18.7 million (€17 million) has been spent from a $20 billion (roughly €18 billion) settlement BP paid to the US Federal Government to compensate for the environmental damage caused by the spill. They are creating around 15 hectares of new habitat for the pelicans and other seabirds so that when they return to the island to breed they will have plenty of space to spread out.

Watch the video to find out how conservationists are restoring Queen Bess Island.